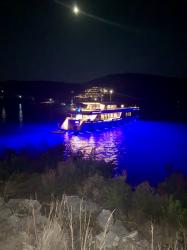 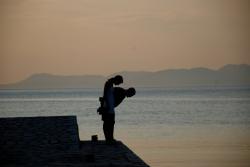 We left Goat Bay on the bottom of Ithaka for Ày Nikólaos on Zakinthos, motoring to the bottom of Cephalonia and then having a cracking sail between the two islands. This was a repeat of last year. We arrived in the harbour in a 15 to 20 knot wind, the first and to date, the only piece of tricky mooring this year. Stavros was there to take lines and take no money, just to invite us to his restaurant, to which we obliged. The quay, which we remember from the last time was this high wall designed for large vessels. It was higher than our freeboard and worn and horny with pebbles, good for grating cheese and the sides of yachts. This fact suddenly became more obvious as we were hectically blown on and we did a last minute go around to get more fenders down. We had a great night at Stavros’ restaurant, but no Greek dancing on the night we were there.

We decided to give the town of Zante a miss, although the town itself sounded worth visiting, the reports of a disorganised port were off putting. So at 11:00 after breakfast in Stravos’ other establishment, we set off for Katakolon but as the wind was only supposed to set toward the afternoon, we motored 2Nm down the coast and dropped anchor for a swim in a cove off a beach. Well sailing did not happen on this day, we motored all the way to Katakolon and were relieved to see a cruise ship departing just as we arrived. Finding a berth required quite a bit of driving around but eventually we squeezed in between Zorba and his much younger and sexy girl friend and another British boat. Not realizing we had laid our anchor over theirs, however to be fair, there chain was not directly off their bow. All well until the morning when I SUP’d out to help the Italians with their snagged anchor and then had to sort our own which the British couple pick up. No friends lost and all in a days work, we reset and made plans in the oppressive heat to head for the Ancient City of Olympia, which is of course why all the cruise ships come here. Katacolon is like sticky flypaper for cruise ship types. Amazingly it is in the top 3 cruise ship ports in Greece and it is tiny comprising of many clothes shops, jewellery outlets and waterfront restaurants all waiting like Venus flytraps for the disgorgement of bulging wallets. We were there sans a cruise ship and it was a ghost town for two days. We hired a Fiat Panda and drove to Ancient Olympia, an impressive place with a first class museum. It is where to this day they light the Olympic torch and run the relay to the host country with it. We trudged around the ruins in oppressive pre-thunderstorm humidity.

The following day we had a brilliant sail down to Kiparissia and an impressive walk in the cool of the morning to the castle high above the town. That afternoon saw more good downwind sailing to the Navarinou inlet. Beautifully set behind cliffs with natural arches and caves, we anchored off the beach at the northern end off a beach. Early the next morning, before the heat became too intense, we clambered up to the ruins of a Venetian fort, which again afforded fantastic views across the bay. Veronica was a happy bunny in the afternoon when we went ashore and had a beach lounger for several hours. We were there just a few days prior to the anniversary (6th July 1827) of the scene of a battle between the British (Senior Admiral Codrington) with 26 ships and 1270 guns and the Turko-Egyptian fleet comprising 89 warships 2450 guns. Cocky Codrington triumphed after a bloody destructive 4 hours of carnage. Through some twists of history, the British expressed regret, for they were meant to be upholding a treaty of neutrality between the Turks and the Greeks and then France mopped up any remaining opposition in the Peloponnese and re-established and influenced the town Pilos. The Franks and the Venetians had of course built another impressive fortress many years before. In the end, through some further chicanery not understood by the author, Greece was free? It is all Greek to me.

From thence we spent a night each at Methoni and Koroni, and experienced more stunning castles and Greek fare, void of chartering types and plied almost exclusively by local tourists with a smattering of other Europeans.

We waited for the wind until noon on the 5th of July and sailed in westerlies for Porto Kayio 42Nm distant, on the middle southern Peloponnese peninsula. The only other boat, an Austrian wooden ~28ft classic, anchored with us left at the same time. We dropped them initially but impressively they caught us after we spent some time setting up the parasailor, under which we crawled along at 3 knots for 3 hours before submitting to the motor for an hour. Then the blow started at 17:30. Coming around the Ák Tainaron lighthouse at the bottom of the middle Peloponnese peninsula, this mean looking 80ft Maltese racing boat chased us around the mark as we did a controlled gibe and headed the 4Nm north to toward the magical place of Porto Kayio. Going north we are on the wind and it was gusting 20knots through the valleys. The Maltese had a full singing and dancing crew of young winch-grinding gorillas, I have Veronica doing a fine job in some frenetic conditions. Of course we should have reefed but with only 3Nm to go we just let the traveller all the way down and screamed along at 8 plus knots with reduced Solent. Naughty sailors! We arrive in the bay and as it is the only shelter for miles and it is dusk, it is rammed with boats. It is gusting 20 plus through the crags and crannies and the boats are dancing side to side on their anchors, like boxers dodging blows. We drive around in fading light, looking for a gap to drop in where it is shallow enough and there is sufficient swinging room. It is a bit like looking for unicorns in Antarctica. We choose a spot in front of the Maltese, they gesticulate on the bow, saying they have 100m of chain out? Even the second mate figures they are either massively confident about the consistency of the wind direction or they are bull shitting to scare us off .....or with that radius, we will see them on the rocks in the morning? We give them the benefit of the doubt. We set between the Kiwis and the Dutch. The antipodes are fine but “Het Vrou” is doing a Dutch windmill impersonation. I can see this is going to work fine, I tell Veronica Morris to ignore the windmill and keep dropping. The anchor chains are tight like piano strings and chain lengths are well matched and it turns out to all be good though the night. The Dutch go into the village for dinner on their posh rib with a steering wheel. While they are away, we have stayed well clear of them. For some reason on their return, they up anchor and head out to sea in the dark, maybe this was their plan all along but I hope it was nothing we said. As their stern light disappears around the headland, the man in the sky turns off the fan. We are drinking wine, eating our pork chop and coleslaw, and wondering where they have gone and if they are having an enjoyable motor through the night?

As a synopsis, the Southern Peloponnese are definitely worth a visit but going slower in the shoulder season when the heat is not a deterrent to scrambling up to explore and understand the history would be better. The Greek gods, the Spartan’s, the Venetians, the Brits, the French, the Ottomans and everything in between, they were not just in the classics and the school history books, they were here. The coast between the coastal towns is sparsely populated and the vegetation goes from lush north of Methoni to harsh and arid as you go eastwards (as much to do with the lack of soil, as to do with the hot but not so arid weather). The rewards are many, even in July the tourists are sparse (now where did that word come from?) and generally comprise Greek locals or hardy trekking types seeking out the different. The water is azure and gin clear in most bays with numerous top quality beaches are to be found that are deserted by world standards. We tagged and leap frogged with S/v Ivernia and had many fun drinks and meals with Mike and Sarah, which spiced up the sailing. We did the same with and Austrian Dad and son, who’s names we never got. There were in a 28ft-ish traditional yacht, sans any mod cons and sailed by the book often arriving in places hours after us and almost never submitting to the motor, in fact for quite a while we were not even sure they had one. Deep sailing respect!