As we are not allowed to go sailing and are stuck at home, I thought it might be an idea to give a breakdown for anyone interested in the work that has been carried out on Topaz Rival during the refit and in preparation for adventures abroad.

1. Hull. Full osmosis treatment for hull and rudder. This is the "HotVac" system and all done under temperature and humidity control. Finished with Coppercoat antifoul.
2. Engine. Old Bukh 36 replaced with a new Beta 35. We have had two Beta engines before on Lazy Bones (20hp) and Alice in Red (38hp) and they were fantastic. Lots of other bits and pieces replaced as part of the engine upgrade, including a new Brunton's SigmaDrive coupling to go with a service for the Autoprop feathering propeller.
3. Electrics. All shorepower (AC) system overhauled with new battery charger. Four new Rolls AGMs as the new domestic battery bank together with a new engine starting battery. Solar panels, and a Rutland 1200 wind generator installed on a stern gantry which also has room for AIS and GPS aerials. New Furuno radar (viewed on iPads and iPhones), new LED lights on mast complete with rewiring. New USB charging points in cabins and in cockpit (waterproof). New Sony stereo radio with Bluetooth.
4. Electronics. New Raymarine wind and depth transducers and i70 instruments. AIS and wireless NMEA 2000 hub. Standard Horizon 1850 VHF with additional microphone in cockpit. Raymarine EV200 Autopilot installed in addition to old Autohelm (left as a backup).
5. Water and waste. New holding tank fitted with external deck fitting for pump out. New Jabsco toilet and smelly pipes replaced. New pump for salt water in galley.
6. Rigging and sails. Full rig replacement by Allspars as well as new guardwires. Furling gear serviced on main and genoa. Running rigging being upgraded (some done by Allspars, more to come). Existing sails cleaned and repaired with new UV strips and new downwind genoa and new sprayhood ordered from Sanders Sails (delivery when we can get to Lymington)!
7. Deck fittings etc. New Knox 18kg anchor (2019) now matched with 60 m of 8mm chain and 30 m of anchorplait to run with new electric Lofrans 1000W windlass which has up/down switches On deck forward and in the cockpit.
8. Cabins and accommodation. All portlights and hatches reglazed and revealed. New curtains throughout. Lee cloths on saloon and quarterberth added.

As you can see, this is a major upgrade and although most of the work has been done there are a few other things such as a new liferaft which are yet to come.

The only problem is that we can't sail anywhere at the moment! But guarantee as soon as we are able, we will be back in the water. Just have to be content with sowing seeds in the greenhouse.
Comments Covid-19 has brought everything to a shuddering halt. A week away from relaunch and Baltic Wharf is in lockdown with no work possible and no real idea of when things might be back. The good news is that the solar arch is in place and Nick (electrician) says he would have finished by the end of the week and Allspars say adding the final guardwires will be top of their list when everything re-opens. So we are close and should be ready to hit the water whenever restrictions are lifted. When that will be is anybody's guess. Stay well 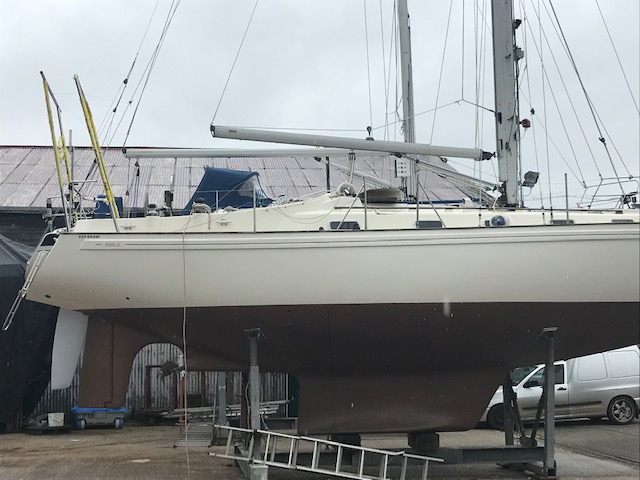 "Looks like a boat now", so said the crane driver at Baltic Wharf after lifting the mast back on Topaz Rival. New rigging all around the old mast, as well as a service for the furling mechanisms of both the mainsail and the genoa. Plus some new furling lines and a topping lift (more running rigging to follow). The new engine is now ready to be started after the exhaust was set up and a new Racor fuel filter (easy and simple maintenance) installed. Feels like real progress with the end in sight. Other minor things have been finished such as a salt water pump in the galley and a new engine water strainer. The single biggest item left on the list is the solar panel arch, half of which was in the shed and hopefully this will be set up next week after which the electrics and lifelines can be finished. The target is for a relaunch on 31 March as the tide times and depths, plus the Easter holidays, mean this is the last day available until 14 April. Keeping fingers crossed. 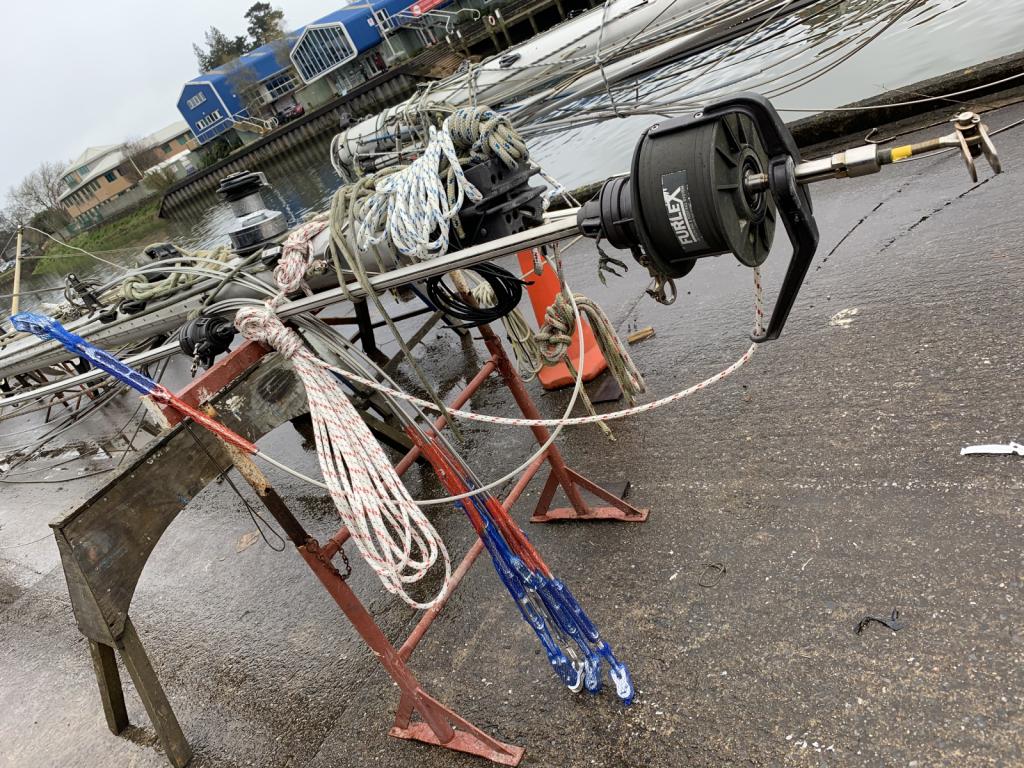 The new rigging is ready 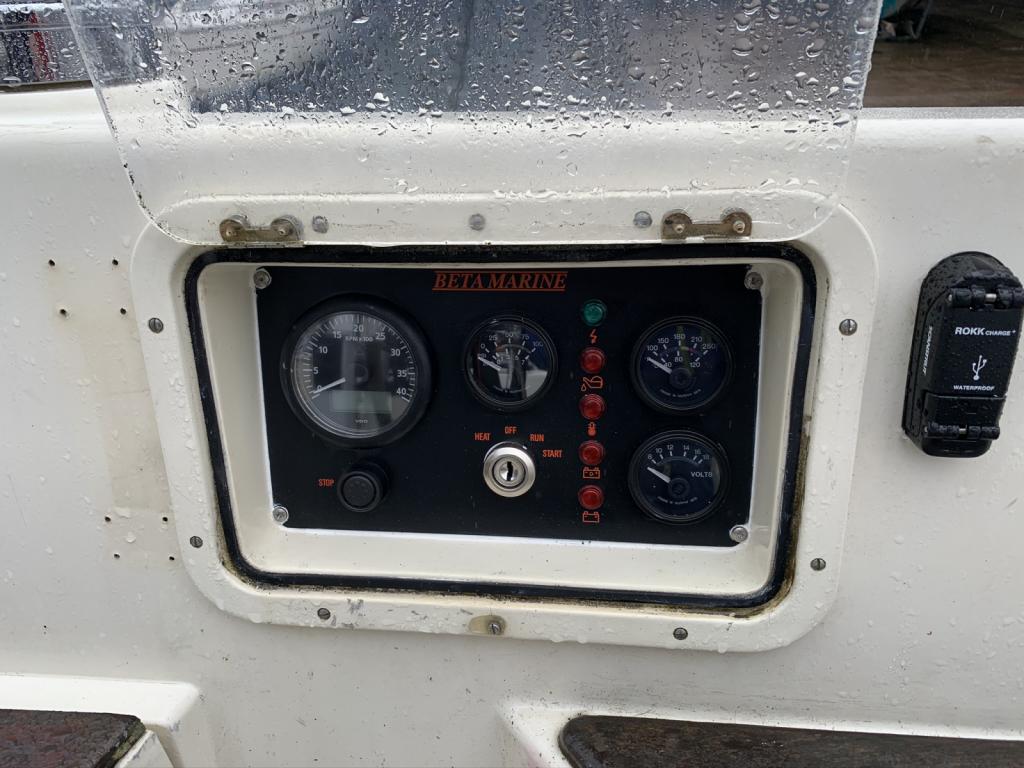 Beta engine control panel. The box to the right is a waterproof USB point 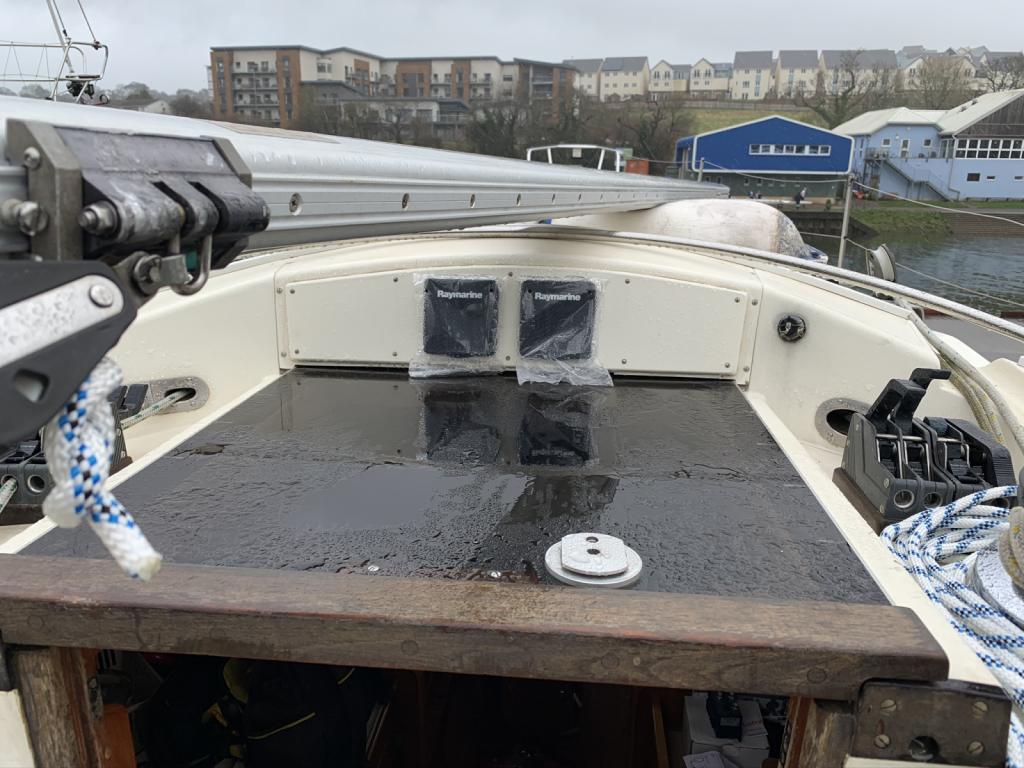 These will be the new depth and wind instruments 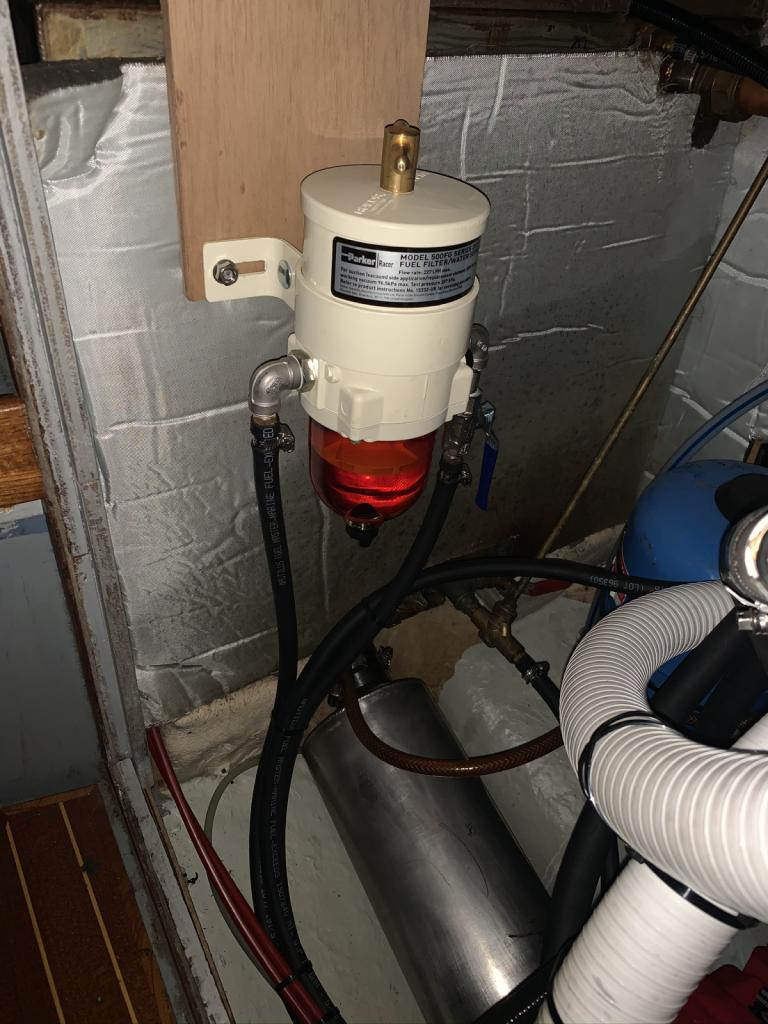 Got down to Totnes early to give the mast a clean with boat shampoo and the updated version of Blakes' Mast Care. This Hempel product (Blakes were taken over by Hempel some time ago) is now called Alu Protect and works wonders on 30-year-old masts. The mast was out of the rack and on accessible trestle tables so that Nick the electrician could install the new LED anchor/tricolour light, the VHF and Windex (wind direction instrument), radar and LED white steaming and deck light. The Furuno radar is unique in that it sends its signal direct to iPads and iPhones rather than to a multi-function chartplotter. At the same time, agreed the position of the solar panel arch to take a couple of solar panels and the aerials for the GPS and AIS. Hopefully, this will be finished by the end of the month. 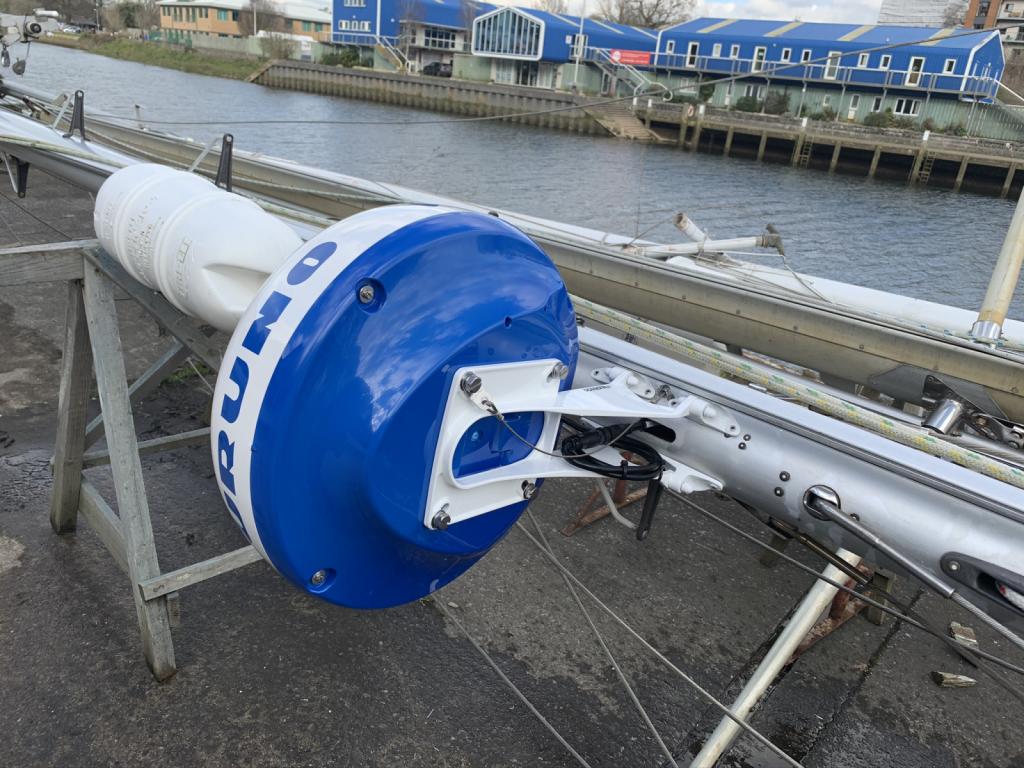 The new radar randome on the mast

Out with the old, in with the new The new engine is now in place, but not connected, and all the old electronics are being stripped out, ready for the latest technology. You can see from the pictures how much smaller the new engine is (Beta 35) against the old one (Bukh 36). The four new domestic batteries are also visible (Rolls AGMS), plus other bits of kit lying around ready for Nick (electrician) to fit. The boat looks a bit of a wreck as everything is pulled apart to lay the new wires. Nick (engineer) will be back shortly to finish off the engine installation. Hopefully, I will be back down in Totnes tomorrow to clean the mast as Electrician Nick is planning to rewire this week. 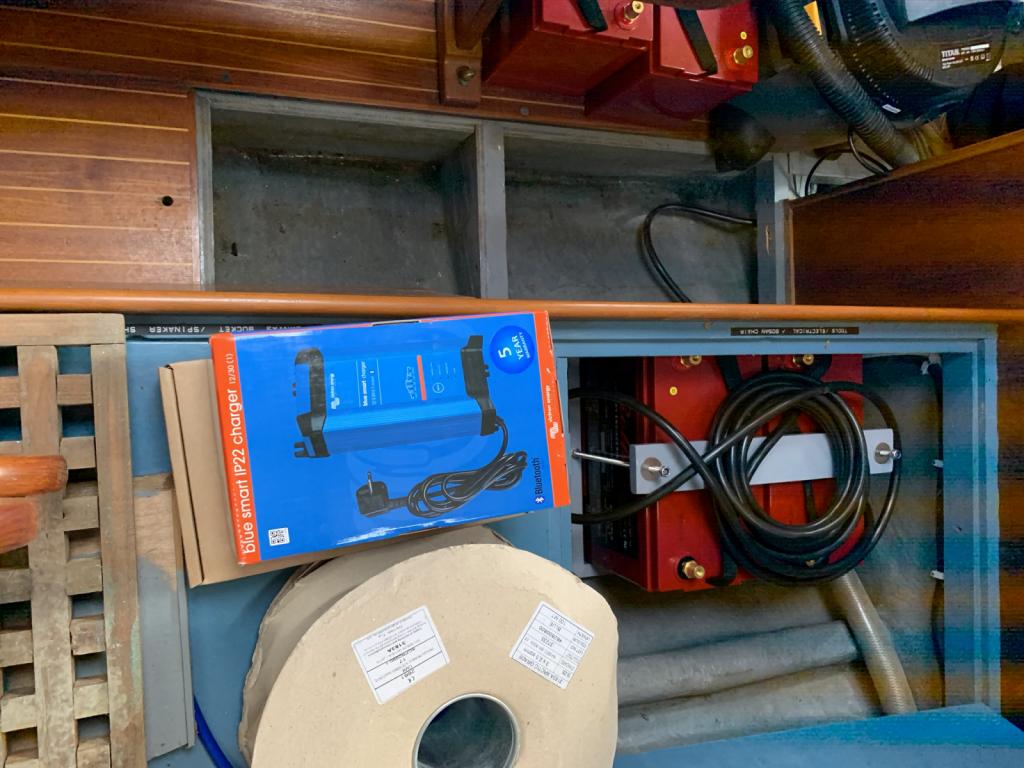 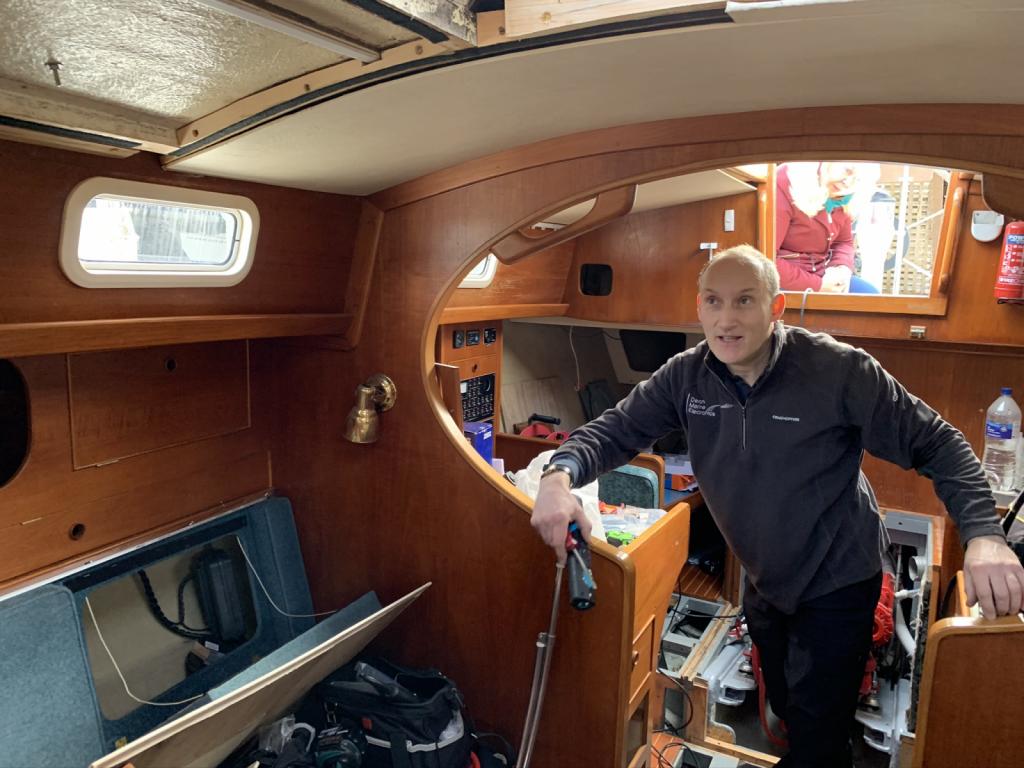 Nick with the chaos he has caused through rewiring! 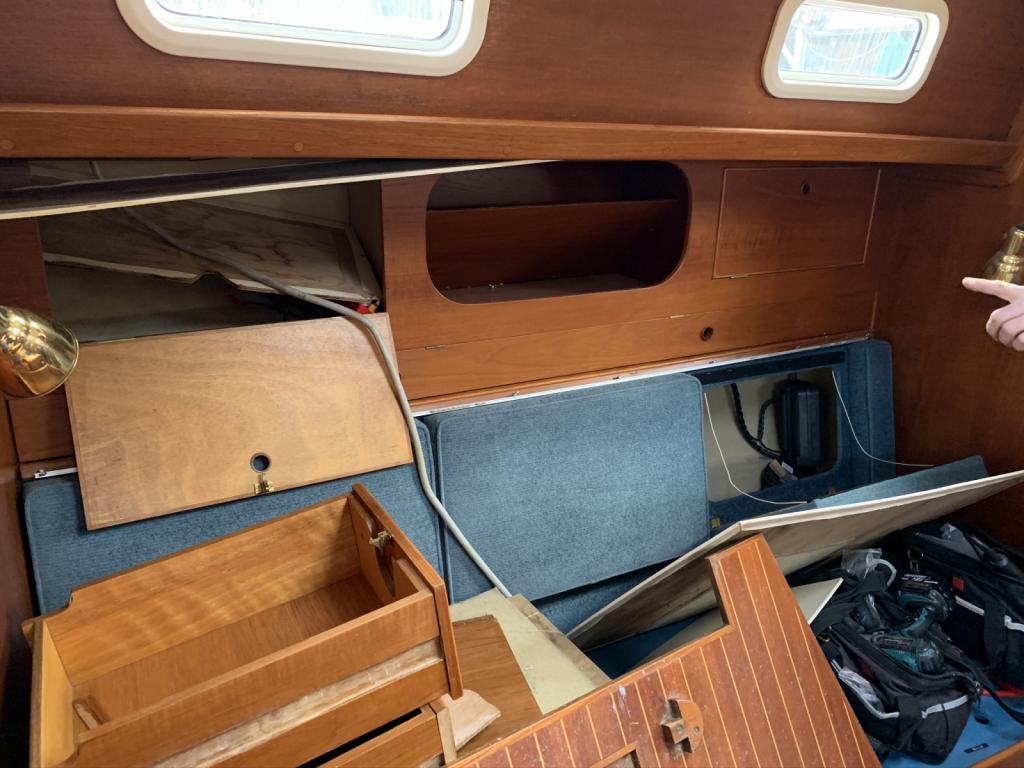 Although I haven’t seen it yet, I’m told the new engine is now in place. Nick (electrician) reported on seeing a big new shiny red piece of metal in place on Friday. Confirmation from Nick (engineer) that this was indeed the case and the fitting of the new Beta 35 should be finished next week ready for sea trials when launch comes at the end of March/beginning of April. The serviced Bruntons Autoprop will be delivered early next week. Nick (electrician) has started stripping out the old electrics and will be working on Topaz Rival over the next couple of weeks. We are waiting for the final design of the solar panel arch which will also host the antennae for things like GPS, AIS and satellite telephone. Looking forward to our next visit to Totnes to see progress. Topaz Rival is now out of the shed and standing on the hard at Baltic Wharf and Dawn and I popped down last weekend before all the excitement began.
Comments
Older
Contents