Before leaving Santa Marta yesterday, Maynard downloaded a programme called ZyGrib (you can find it on Google) which was suggested to us by Diana and Andrew who are soon to complete a 4 year round the world trip on their cutter rigged yacht 35ft Saviah. It is a very comprehensive World-Wide weather forecasting programme which has the normal functions of wind and waves but also has a lot of other indicators such as winds and isobars at various altitudes in the atmosphere, CAPE and CIN. These initial tools are very handy for storm predictions, especially in the tropics. CAPE is a measure of how much electricity is actually stored in the atmosphere and CIN is a measure of the atmosphere's capacity to store electricity. Using these two maps, one can get an idea as to where the thunderstorm hotspots might be well in advance of actually seeing any sign of a storm. The above CAPE map which was generated at the time of writing this post shows that the Central Caribbean has high capacity for thunderstorms whereas the area where we are which is about 40 miles from Cartagena has a relatively low electrical charge and hence accounts for the clear weather we're currently experiencing with a few cumulus clouds in the vicinity. You can also see that the winds are very light and the sea state is no more than 0.3 m which was ZyGrib's forecast.

After refueling at the Santa Marta Marina and saying fond goodbyes to the staff, we motored 57 miles yesterday following the Colombian coastline passing the Magdalena River which has a reputation for large debris and weird currents and waves. We've seen numerous large logs floating 4 to 5 miles offshore and clumps of weed which we've managed to dodge. We arrived at Puerto Velero as the sun was setting. Interestingly, the book The Cruising Guide to Colombia, our Raymarine Charts and the latest paper Colombian chart all had the point at Puerto Velero plotted 1mile north of its actual position. The Magdalena River dumps so much sediment into this area that all charts say that depths and land forms can significantly change from year to year so a visual approach was necessary. The Magdalena River is one of the largest rivers in South America. We anchored opposite a marina in a large sheltered bay with good mud holding in 6 m of dead flat water. 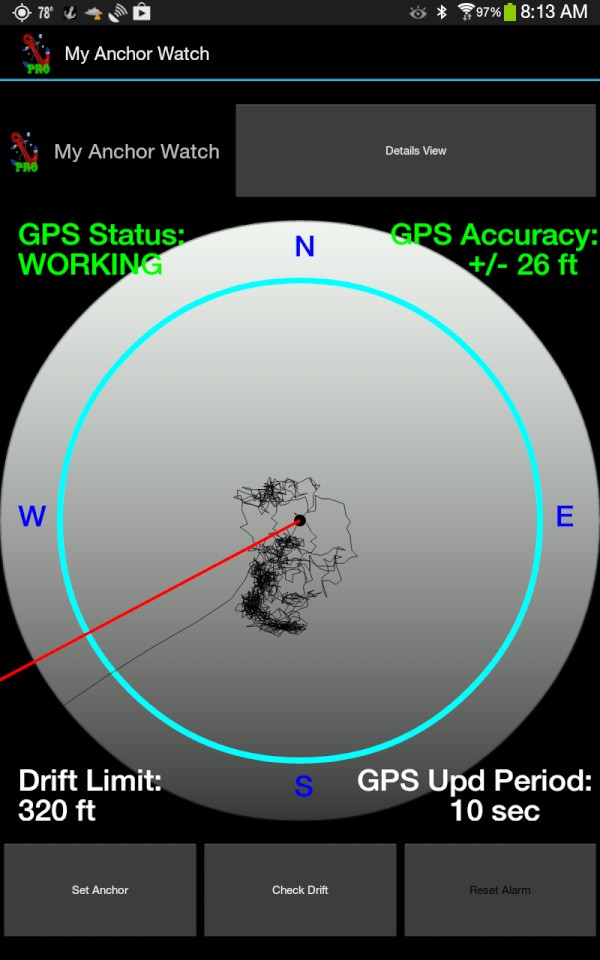 Storms popped up after sundown so Maynard set the anchor alarm on a new App on his Samsung Galaxy 8.0 Note with inbuilt accurate GPS called My Anchor Watch. There are versions for Android or Apple. This is a really fantastic App as we can now turn off all boat electronics to save electricity overnight. The App itself keeps a very close track of the vessel's position and has a loud alarm which sounds as soon as you get a preset distance away from the anchor. Maynard found this App recommended on Kens Blog. Ken is currently on a Nordhavn 68 and has written one of the most followed blogs ever on a power boat. It Is full of information and we've read his 3 books generated from that blog as they are so interesting. Thank you Ken.
At 0730 we were visited by Colombian Armada Nacionale (Coast Guard) who came on board to check our Zarpe (Clearance) papers, inspect the boat and make sure all was well. We told them we were just about to weigh anchor and they looked disappointed as they would have allowed us to stay much longer if we wished to do so. They were extremely polite and cheerful and loved the boat. They probably don't see too many like ours down this way.
If you're wondering about buying Colombian fuel, we were charged $US4.40 per gallon and have been polishing the fuel on a 2 micron filter with no significant problems yet.