We weren't due back to the boatyard until Monday. We figured that 10 days in Canada would have been ample time to do the antifouling, the modifications to the swim platform, polish the lower portion of the hull, re-seal the transom door, sikaflex areas on deck and look at what would be required to install a new Rocna anchor. We normally would have stayed to oversee these projects but unfortunately getting our visas renewed took priority. We felt we were in good hands at the Front Street Shipyard so we stayed with the plan to see the White Mountains in New Hampshire. Of course, Maynard had not been on the Auto Road which threads its way to the summit of Mount Washington, the highest peak in the White Mountains since he was 6 years of age. He could not have imagined he'd be married to someone who was, let's not beat around the bush, absolutely scared senseless while driving up the guard rail free 8 mile road to the summit at 6,289 ft. We had been on many terrifying jaunts around the world in the past. Heck, I'd shakily walked down the steel steps of the Eiffel Tower, been down the incredible Mexican Hat road in Utah, walked across footbridges hundreds of feet high, but nothing got to me as much as this Auto Road. I admit, the noises were pathetic, the crying, the moaning, the "I don't wanna dies", the "I hate this" over and over. "Just shut your eyes. Now, why are you moaning again?" said Maynard. "I'm peeking," said I. "Stop peeking," said hubby trying to stifle laughter. The dirt road section was the worst with vehicles slowing passing each other so that their tyres wouldn't go off the edge plummeting the occupants thousands of feet to the bottom. How we (and the hundreds of other cars) made it up was a miracle. At the top, I met other people who were equally terrified. One lady put her young son in the front seat so she could lie down on the back seat. It was totally worth the challenge though.

Mount Washington holds the record for the highest wind ever recorded by man at 235 mph on 12th April, 1934 during a great storm. The view from the top was amazing with over 100 miles of visibility in all directions. It is a perfect place for research and weather monitoring as it is located at the convergence of three major storm tracks. It also has unique topography and elevation which creates extreme weather unlike anywhere else in the world. There is a great website at www.mountwashington.org if you also wish to watch the weather throughout the year at any time. The wind recordings and forecasts are quite abnormal. A wooden building on the summit has two heavy linked chains across the roof which are bolted into the ground to keep it from blowing away. There is also a stone building 2 ft thick which is very well insulated against the worst weather and a heated observatory. A three mile trip each way on the cog railway takes people up and down the mountain at an average grade of 25% and and a maximum of 37%. I would love to have travelled on the train the following day as it is the world's first mountain-climbing cog railway but the thought of it falling off the mountain with me in it was too much to think about.

The last two nights of our holiday away from Vanish were spent in The Victoria Inn B&B in Bethel, Maine, not something we ever do as B&B's are not our style but we couldn't find accommodation elsewhere. The house was built in 1895 and is described as having ornate rooms and loft suites but it seemed to be more distressed Victorian style to us. We turned up and no one was there to greet us. The front door was open and the housekeeper had left a key with a note to take Room 8 although our names were not on the note. Bethel is a pretty country town with good restaurants and pleasant neat homes, a nearby ski slope and hiking trails. We enjoyed a great meal in town and just before bed, I put my hand on the inside handle of the bathroom door and heard raucous laughter from a group of ladies out where Maynard was sitting in the bedroom. I thought, "Oh no, this is going to be a noisy place. I hope those women stop laughing." I opened the door and asked Maynard, "Did you hear that?" He said no, so I dropped the subject but funnily, you could hear a pin drop in the room. Well that's weird. During the night, Maynard woke up around 3 a.m. Someone was knocking on the door. Loudly. He heard it twice. I was awake but heard nothing. He even got out of bed and looked under the door, but no one was there. In the morning at breakfast with sour milk and fizzy out of date orange juice, I asked the housekeeper if someone was staying in our section of the house. "No, there's no one there. The room on one side of yours is empty and the room on the other side is where the owner lives but she's in hospital right now." We couldn't wait to get out of there and back to Vanish. 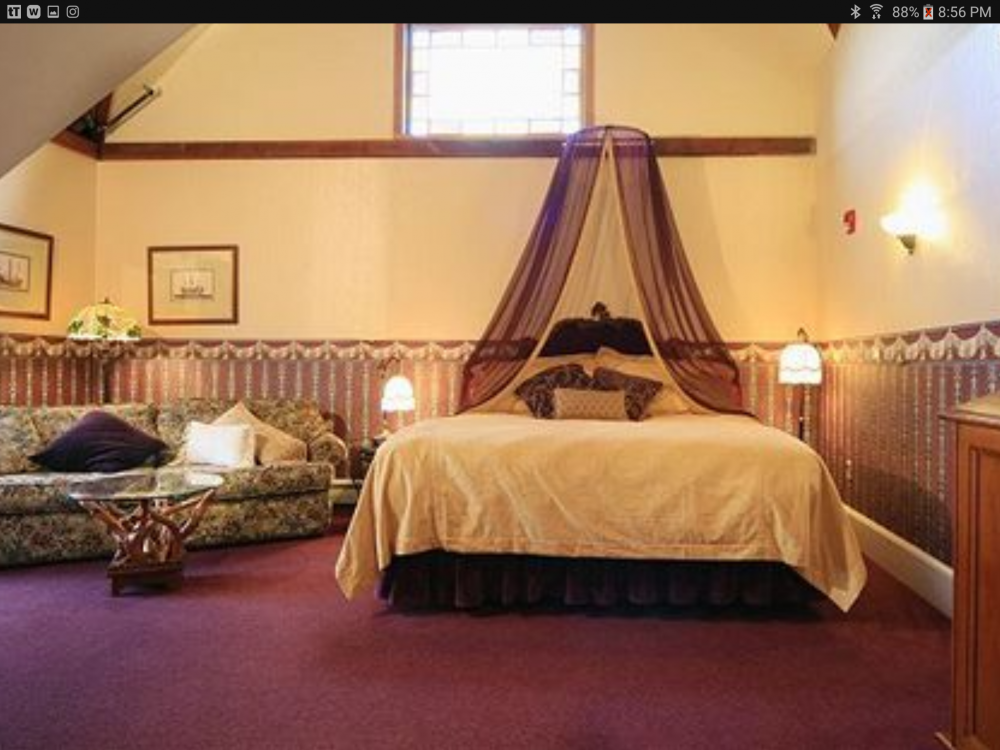