Vanish has two 25 kw Onan gensets which keep the batteries charged and provide a reliable source of 240 volt electricity when we are anchored out. We run them approximately three hours a day and along with the trickle charge from our solar panels, we never have a shortage of power. This morning, Maynard started the portside genset as normal then after a few seconds it turned itself off. Really? This was a first after five amazing years of trouble free reliability. Sundays are days for messing around in the dinghy, going to lunch, exploring creeks and hiking through local National Parks but no, not today as the engine room was calling. The genset will switch itself off for a large number of reasons as it has many sensors. The genset display said it had an Error Code 7, Loss Of Raw Water Flow meaning it was not getting any water or that there was a blockage somewhere in the saltwater intake or possibly a raw water pump failure or perhaps the impeller is damaged.

He checked the sea chest where the raw water intake on Vanish is located and it all looked clear. He closed the seacock and inspected the impeller and it all looked fine with saltwater still being in the saltwater pump. He restarted the genset and once again it went off after a few seconds. It ran long enough for him to determine that the raw water pump was circulating water so it must be some sort of sensor failure or some other obscure problem. He removed all the panels around the genset for access and located the raw water pump pressure sensor and unfortunately in the process, badly tore a back muscle, something he hasn't done all year. One of the wires to the sensor was a bit rusty and one of the terminals on the sensor was also a bit rusty. He cleaned them up and restarted the motor and again it died after 3 or 4 seconds.

He removed the suspect sensor, brought it up and checked its conductivity which seemed ok. After a few pain pills and a prescription anti-inflammatory called Mobic, he thought about taking the sensor off the starboard genset to see if that would solve the problem. He decided not to do that as we have one functioning genset and he has a basic policy of not messing with things that work. I suggested we look in our spares to see if we had a spare one but it was a long shot. When we first started out on Vanish five years ago, Onan prepared a spare parts kit for us. As Maynard could now barely move, I jumped down into the pump room which is located under the floor on the lower deck, and hauled out a 50 lb box which contained all our genset spares and right on top was exactly what we needed, a spare Raw Water Pressure Sensor Part No.0309-0717. Apparently, these things fail from time to time and Onan includes a couple of them in their spare parts kit. He hobbled down to the engine room again carefully, put the part in, started it up and it roared to life without any complaint unlike his back which will take some time to heal. We'd planned on moving Vanish today but will wait until Maynard has more mobility. 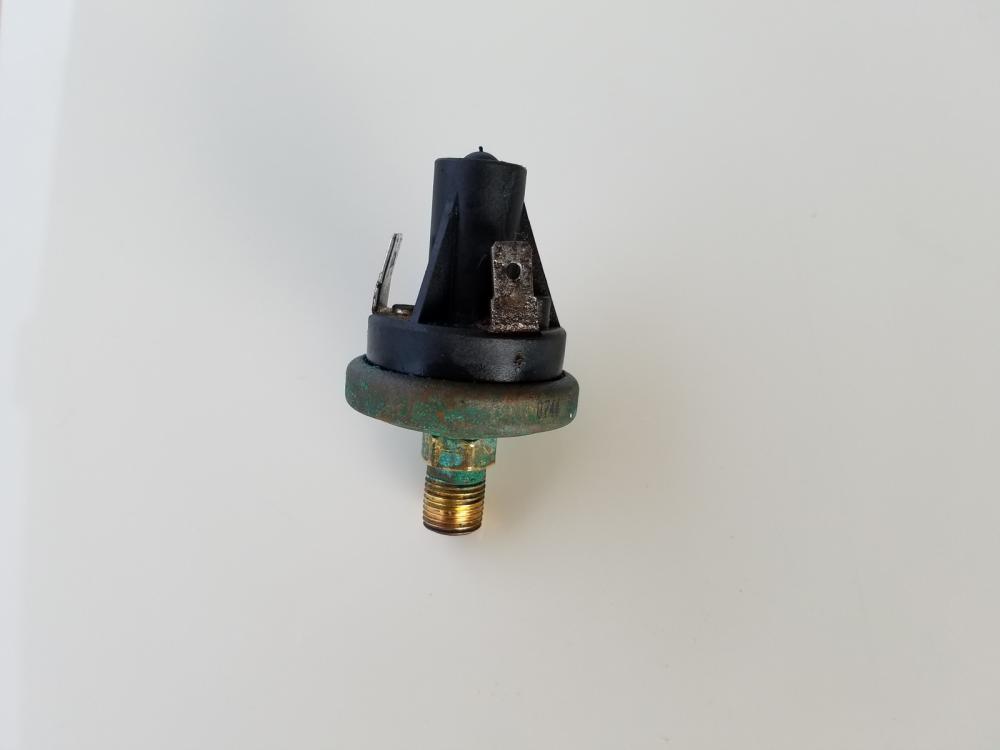