We’re currently anchored in another picture perfect spot in one of our favourite anchorages, Ebenecook Harbour on the Sheepscot River near Boothbay. We left Rockland last Friday after a number of consecutive foggy days. The seas were 3 to 4 foot with high fog which burned off by late morning. Yesterday we took the dinghy through Townsend Gut and spent Saturday in Boothbay being tourists. We met artist Maria Boord at her studio in town. She paints up to 15 works at a time in oil on canvas and wood and her pieces really capture the feel and beauty of Maine. One painting in particular took my fancy and Maria kindly showed us on a tourist map where to find the actual scene of a shack covered in lobster buoys. Unfortunately the painting had sold otherwise I would have been very tempted. It was getting late in the day and was quite cool but we decided to find the shack and headed in the general direction of the map but then converted to the Navionics App on Maynard’s phone to try to locate it. 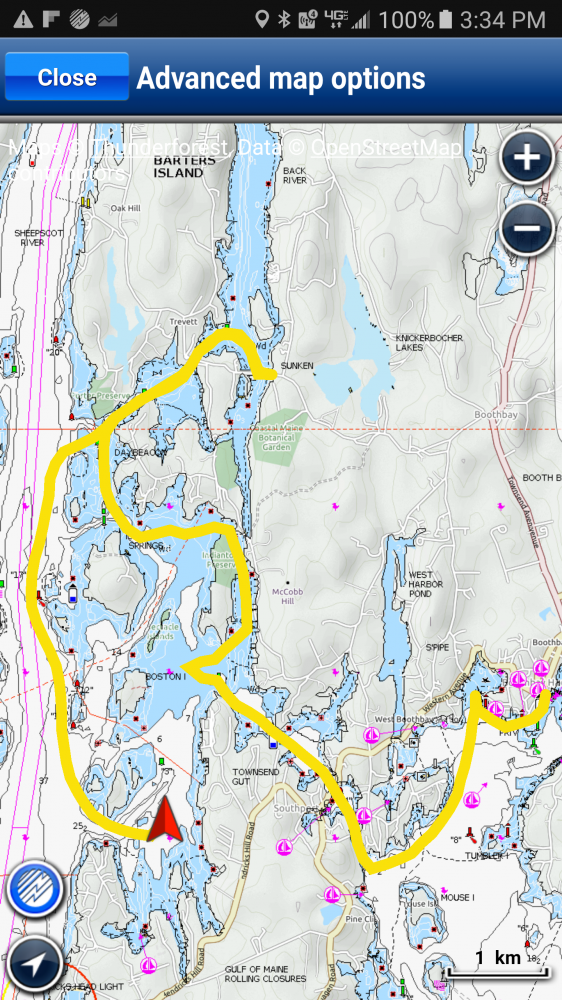 It wasn’t easy as there are a myriad amount of waterways, rocks, the ubiquitous lobster buoys, bridges, and docks and a tourist map is not at all like a marine chart. We eventually found it (at the top of the above map) and I was able to take photographs of the colourful lobster buoys. It was a worthy and successful hunt. 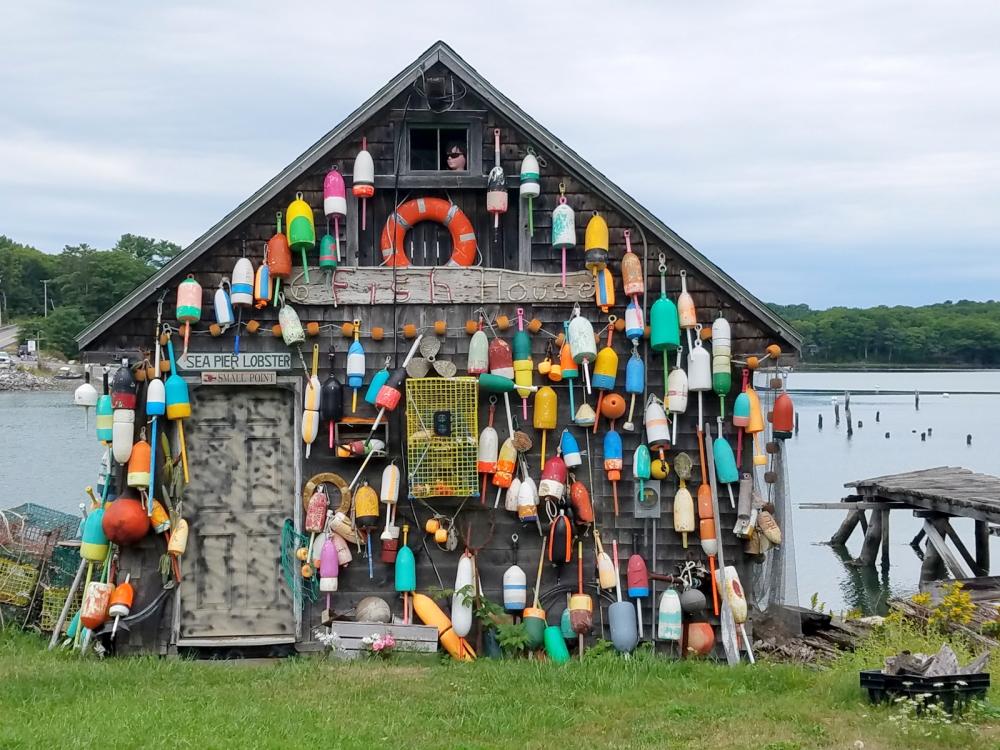 Everything happens at 3:00 am on a boat doesn’t it. A front was due to arrive after midnight. We have previously dragged anchor at Ebenecook Harbour with the CQR, so I made a special note before retiring of the direction of a red light tower, the moon, a nearby island etc so that if our anchor alarm screamed at us, I could leap out of bed and know exactly where we were. At 3:07 am, we awoke to flashes of light and the sound of thunder very close. I leapt out of bed, put my nose to the flyscreen and could see a white wall. Huh? Wake up Vicki. Something’s not right. Maynard waited for a report under the covers. I went outside and couldn’t see a thing as we were surrounded by the thickest fog ever. The subdued flashes of lightning continued from the nearby storm but to see fog and lightning together like this is rare. It is possible for thunder fog to occur when there is a very moist stable layer at the surface with a very unstable atmosphere above it. Last year we experienced thunder fog one morning in Massachusetts. The storms passed north of us and by the morning the fog had lifted. We experienced another storm mid-morning today with wind and our anchor pattern shows we have not moved an inch with the new Rocna. It’s starting to truly feel like a “set and relax” anchor.