19 to 31 May
Brest is the biggest French port on it’s Atlantic coast and home to the French navy (I assume they were all at sea as there weren't any boats in the port!). It was pretty much destroyed in 1944 in the "Battle for Brest' as the allies and Germans saw it's strategic importance and bombed it to pieces trying to secure it. There really is only one street that pre-dates 1944 so its not the prettiest french town. But a lively place and unusual for us south coast folk to see the bars full of people under 30.
Our first task was to clear customs (the Douane) and hope that our visa was ok. They were very casual about it and didnt even want to stamp our passports, saying that we had a visa and we could stay in Europe for a year and wouldn't need to check into any other countries. So we are very pleased/relieved that we are legal in Europe and not limited to the 90 days in 180.
We visited an excellent aquarium, which told us a lot about the marine life on the Brittany coast. Then had a days bike ride exploring the area to the north and west of Brest. Great coastal path and coastline with secluded beaches and rocky outcrops. Lots of quiet rural lanes with fields of either cows, hay or sweetcorn. 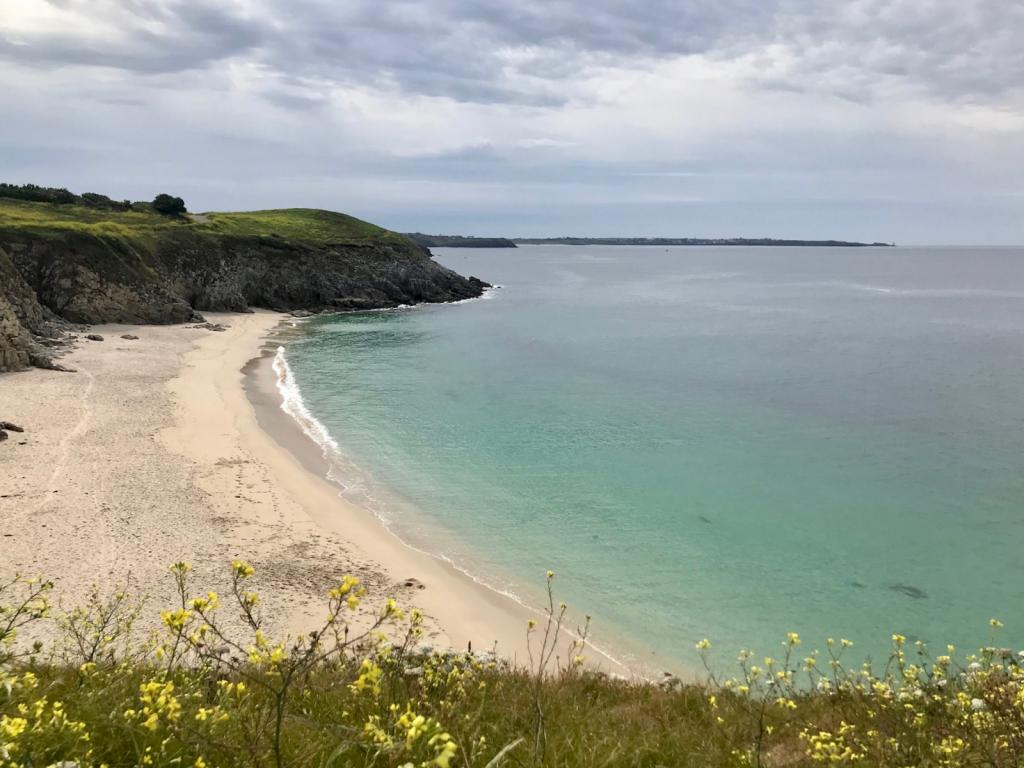 An early-ish start on the 23 May for the 70nm journey south to Concarneau, we needed to get the timing right as there is a narrow section 'the Raz De Sein', with strong tides that we needed to go with.
Not too much wind, but the tides helped and we arrived just before 6pm.
Totally different to Brest in being a tourist town famous for its walled town built on a small island, connected to the town with a bridge. The small marina is right next to the old town, so a very pretty spot to be. Away from the old town there is a thriving fishing port, apparently the 6th busiest in France, we can attest to this by the number of fishing boats blasting past us in the early hours of the morning. An interesting bike ride from here, which included paddling across rivers and being shouted at for being on someone’s private land...pardon 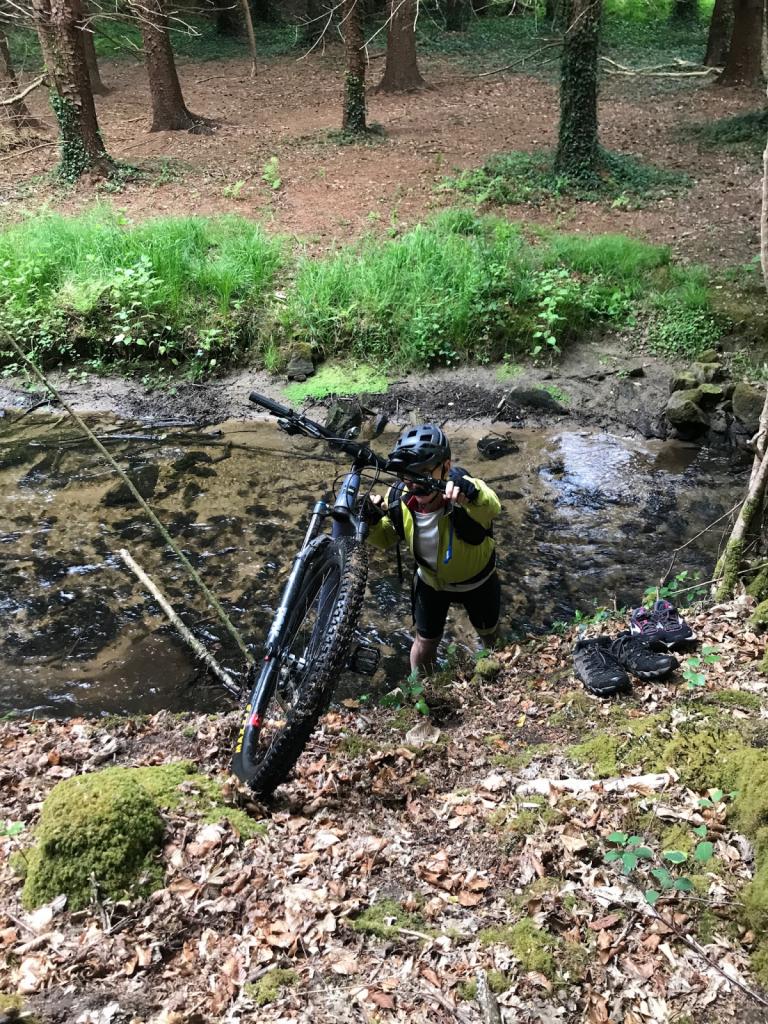 We were evicted from Carnarneau on the 26 due to a boat rally arriving and continued south for 30nm to Port Louis. It is situated at the entrance to Lorient and has an amazing citadel guarding the entrance to the port, started when the Spanish controlled the port and then finished by Louis X111, before being bashed around a bit when the Germans had control of it during WW2. It houses 2 museums, one of which details the history of the French East India company, which were based in Port Louis. The company were importing so much from the Orient that they didnt have room in Port Louis so used the land on the other side of the river to create storage areas and called it L'orient, know today as Lorient. A great time to arrive as the French mark Ascension Day much more than in Britain and there was a 2 day festival in Port Louis - all free! On the first night we saw an amazing duo doing arty acrobatics (cirque soléis style) and then on the second evening a parkour demonstration (basically a bunch of young men doing ridiculously big jumps off and over walls and not always succeeding).

Again we were evicted, due to another rally! So went across the river to Lorient and the big marina of Kerneval. It's adjacent to a marina where most of the boats doing solo round the world races are based - so lots of very very cool boats to look at. Also an ocean racing museum (only in France if no it the world?) and a submarine museum. The Germans had control of Lorient and used it as a base for their U-boats. They built massive concrete 'garages' to store the subs in, with 5000 workers they completed the work in 2 years, each shed could store 24 U-boats; currently used to store motor boats. We met up with Bruce and Ally in the evening (who have been here racing their boat - Bare Necessities - and stopped in before heading back to Plymouth). 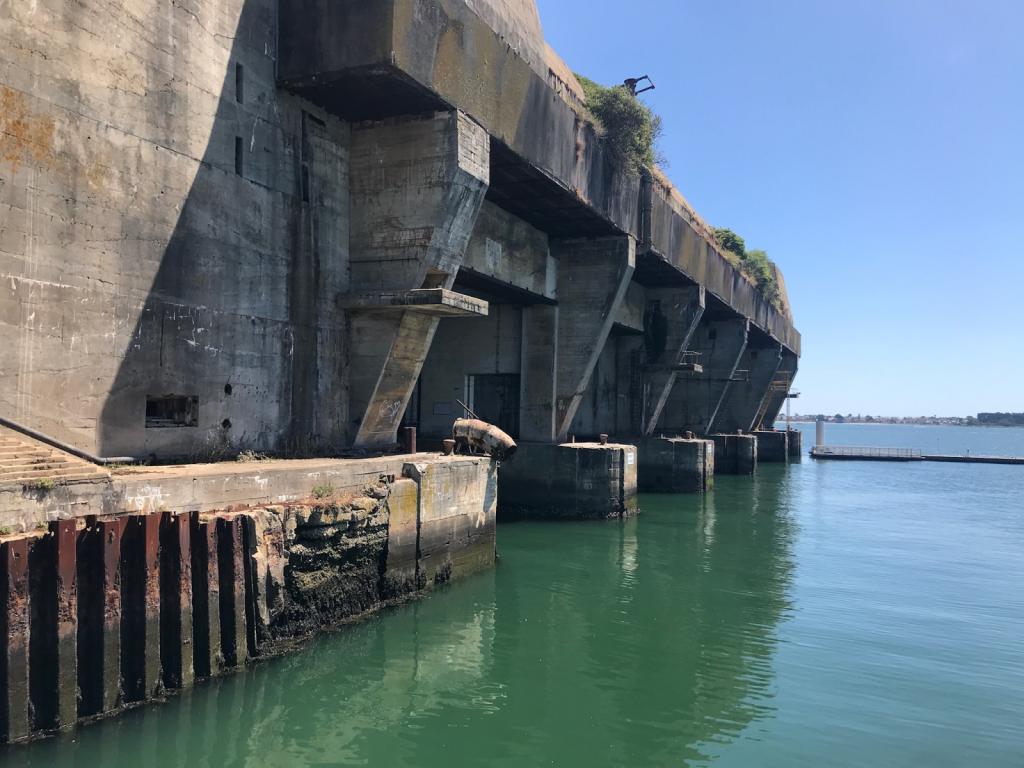 Moved on again! So we moved 35nm further south to La Trinite sur Mer. We actually managed to sail the whole distance, the first time we haven't had to motor part of a journey. A very yachty seaside town, with some of the fastest boats on the planet based here...and we were moored right next to them. Its also close to Carnac, famous for its megaliths. There are over 3000 standing stones all in alignment - amazing to see. Gorgeous beaches too. We had a great day out on the bikes that took us to 2 medieval towns, Auray and Vannes with a wonderful cycleway between them. It was so pleasant in La Trinite we could have stayed a while, but needed to continue south and headed into the Gulf du Moribhan.