14 June. A slightly delayed start after the boulangerie was shut (on a Tuesday!) and Billy failed in his search for another, so we set off, baguette-less. Mon dieu!! The trip was going to be about 180nm, which we estimated at 30 hours, so an arrival time early afternoon on Wednesday. The route is basically get out of La Rochelle and turn left, sailing about 25m off the French, almost due south. Light winds early on slowed our progress and for a while our estimated arrival time went back to midnight on the Thursday. Being impatient Brits, we motored sailed for a while before a good following wind set in and allowed for some very relaxed sailing.

We did 2hr watches through the day and night, selecting the shifts out of a hat, which Jay and I failed to 'fix' and consequently ended up selecting the 12-2am and 2-4am respectively. The wind went westerly abruptly at 01.50 on Clare's watch and from then on we had good sailing all the way though to 11.00, with Billy achieving a top boat speed of over 9kts due to his high skill level!! It was much quieter than crossing the channel, with just a few fishing boats about, though Jay thought he had a submarine on his watch, when the depth suddenly went to 1.2m for a few seconds. Bearing in mind the sea bed was between 100-200m down, this was ca bit scary. Nearing the Spanish coast we had a visit from 50+ common dolphins who stayed with us a while, about the only wildlife we saw all the trip. Approaching Pasaia, our destination, we were really struggling to see the way in - it has a narrow entrance between the cliffs, really quite spectacular and we were grateful the sea was calm as it would be a bit hairy with a big swell. We made it in fine and then it quickly opens up into a wide port area where we found a space in the very small marina. It's very much a working port with some big cargo ships unloading scraps metal and others loading shiny new steel bars and cars. Luckily the marina manager - Ander spoke wonderful English so i was saved having to use my v limited Spanish and no-one was interested in checking our passports/paperwork, so that was a relief. We'd made it to Spain! 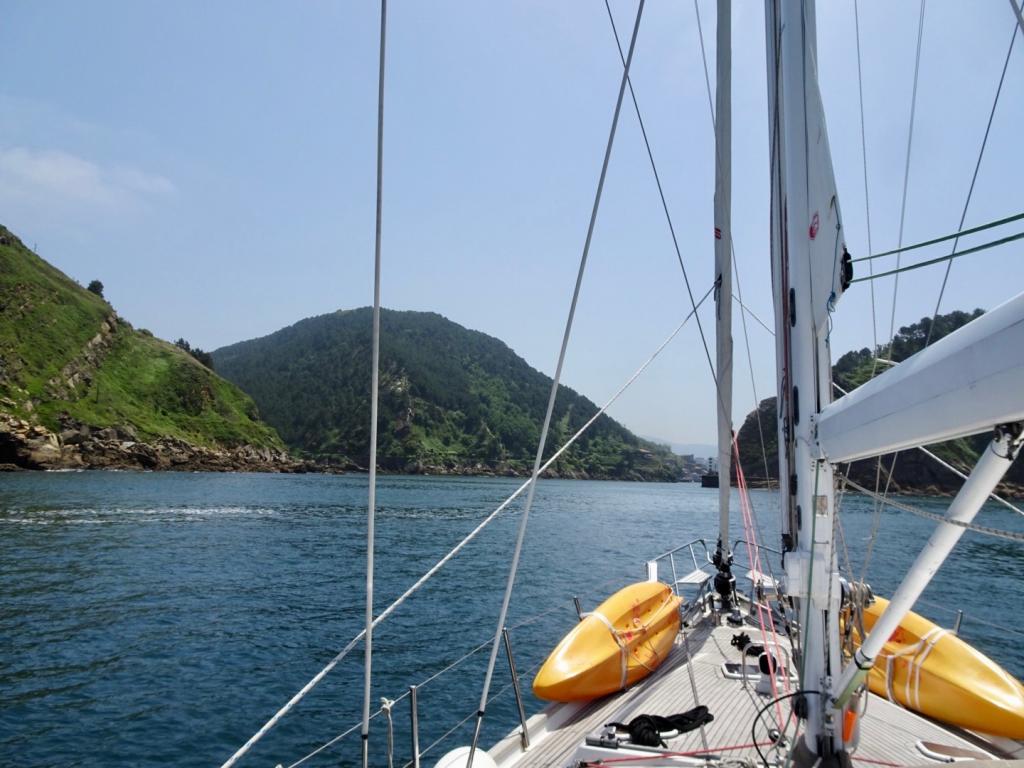