15 June to 1 July
Pasaia (NE Spain, near French border) is split by the river, with the marina on the side of an old town, which just has one narrow street running between the river and the steep hillside behind. The buildings go right to the waters edge, and in the case of one restaurant, over the water, so much so that it has a hole in the floor to the water below. The idea is that they hoist up baskets and you then choose your unknowing victim for supper, either lobster or crab. (Not for us, they looked far to amazing to eat). We thought now we are in Spain we had better try paella, and when the first bowl arrived we thought it was for the 4 of us ...... until a second one then turned up! A large meal for us all! 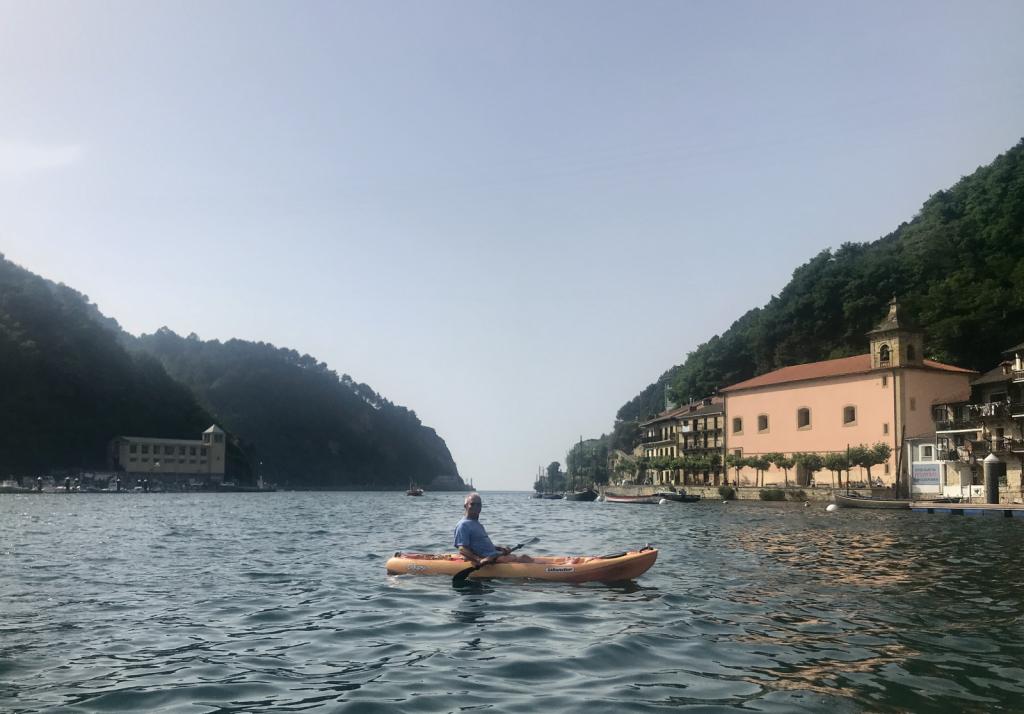 It was pretty warm, getting up to 40c one day and this encouraged all the local children to swim or rather jump off the quay into the water in the most flamboyant way they could, seemingly without any parental supervision. Then all the teenagers where out of town along the coast, with much bigger jumps to do....mostly young men trying to impress the bikini clad ladies!
Billy, Andy and Jay had a day out in San Sebastián whilst i had a day on the boat resting my foot (having kicked the fridge door in anger....it definitely come off best). Then they headed home the next day - it was great to have them on board for the overnight crossing and for their great company of course!

Saturday saw the arrival of Hel & Col, so we met them in San Sebastián. For us this involved getting a ferry across the river and a 20min bus ride, under 5euros for us both. Masks are still obligatory on public transport in Spain, but generally otherwise not required. Pasaia is the big working port, San Sebastián is the posh holiday resort with 2 big beaches, quaint narrow streets full of tapas bars and some grand hotels; quite a contrast to Pasaia and bustling with tourists. 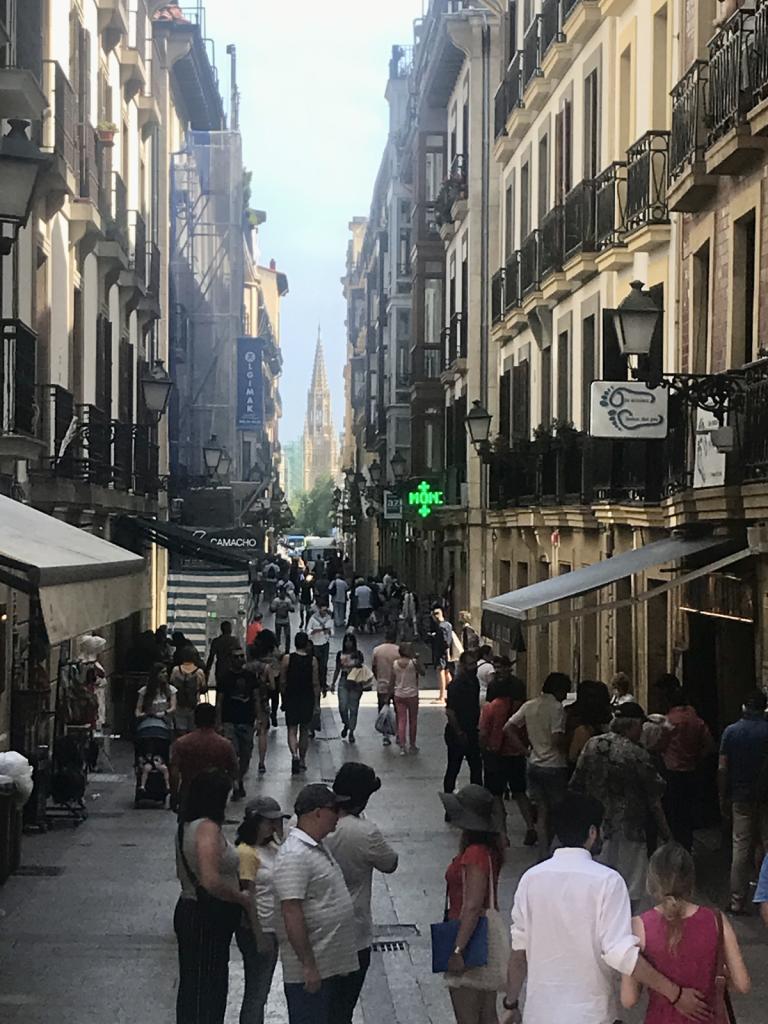 The hot weather broke and Monday was colder with rain, but a relief as 40c is just a bit too much. On tuesday we left the boat and headed off on our bikes for an excursion into the hills, taking advantage of Hel n Col and their hire car as luggage carrier. We made it up to a small a village to stay in a B&B, a wonderfully old building full of interesting artefact and old furniture (though it would have been nice to have more modern bed!) but having a bath was a real treat. Also staying was Thomas (a German off road motorbiker) who joined is for supper in a cafe next to the petrol station, which we didn't hold out high hopes for, but it was a great evening made special by the very cheery owner, who spoke no English but made us feel very welcome...and giving me a fuzzy head by giving us complimentary (large) whiskies at the end of the evening.
Our route took us further into the hills the next morning before heading back down to the coast. One long section was down a disused railway line which had been used to transport iron ore, it was an amazing route with at least 20 tunnels (some of them quite long and v dark) needed as it followed a river down the hill, through steep sided wooded valleys. One memory of the area is the amazing vegetable gardens, all very neat and tidy with what looked like runner beans and potatoes in abundance (but I stand to be corrected by the gardeners!). But as it seems to rain a lot and generally sunnier than uk, its ideal vegetable growing country, the problem is more finding a flat piece of land to cultivate.


Back on the boat we planned to sail west to......but having set off in a gentle breeze and the forecast for a gentle breeze, after a couple of hours we discovered why the Bay of Biscay has such a reputation. Within the space of 5 minutes the wind had picked up to 25-30kts and the waves had too, our planned port had a narrow entrance and we decided it was too tricky to enter in these conditions so had to turn around and head to another with a more sheltered entrance. Luckily they had room for us, there was a big empty area in the harbour; we only discovered what it was for at 5.30am when the large fishing fleet started to return to unload their catch - tuna we think as June to September is the season in this area. 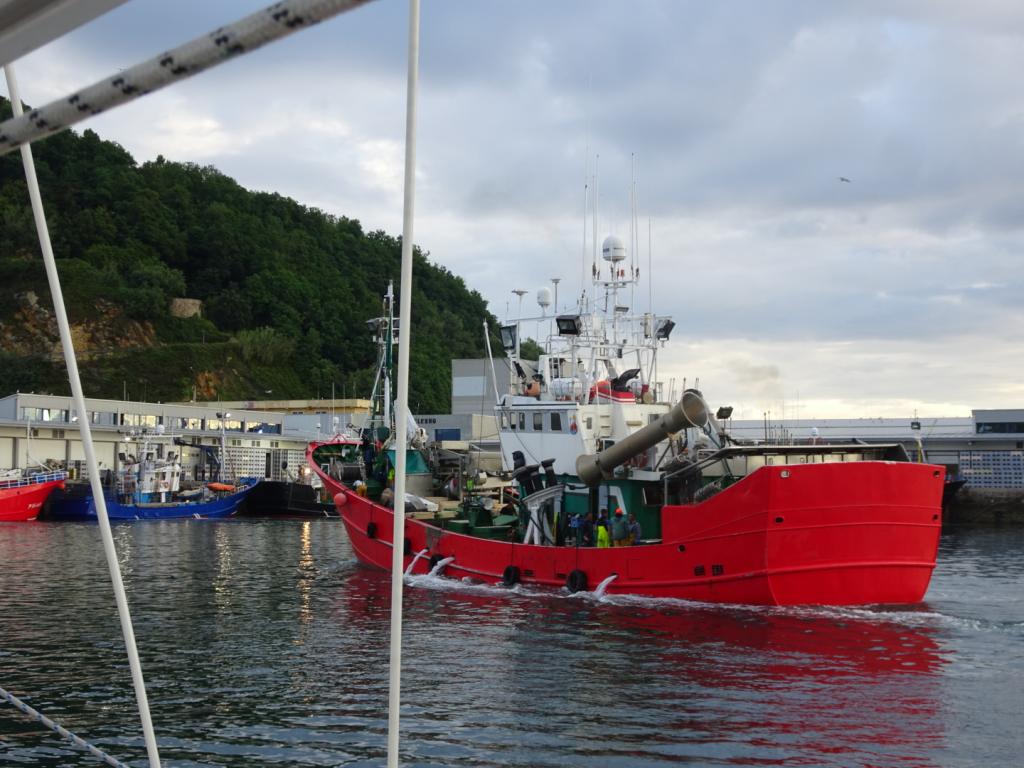 Next day was more settled and we made the longer journey to Bilbao. Our main reason for wanting to come here was to visit the Guggenheim Museum, it really is a spectacular building and some of the sculptures are 'fantastico' but some of the supposedly 'superb examples of post WW2 art' was (in our expert opinion) dreadful. The flower covered puppy the 'wave of sound' that made you dizzy to walk through were very memorable. Can't say much about the rest of Bilbao though. 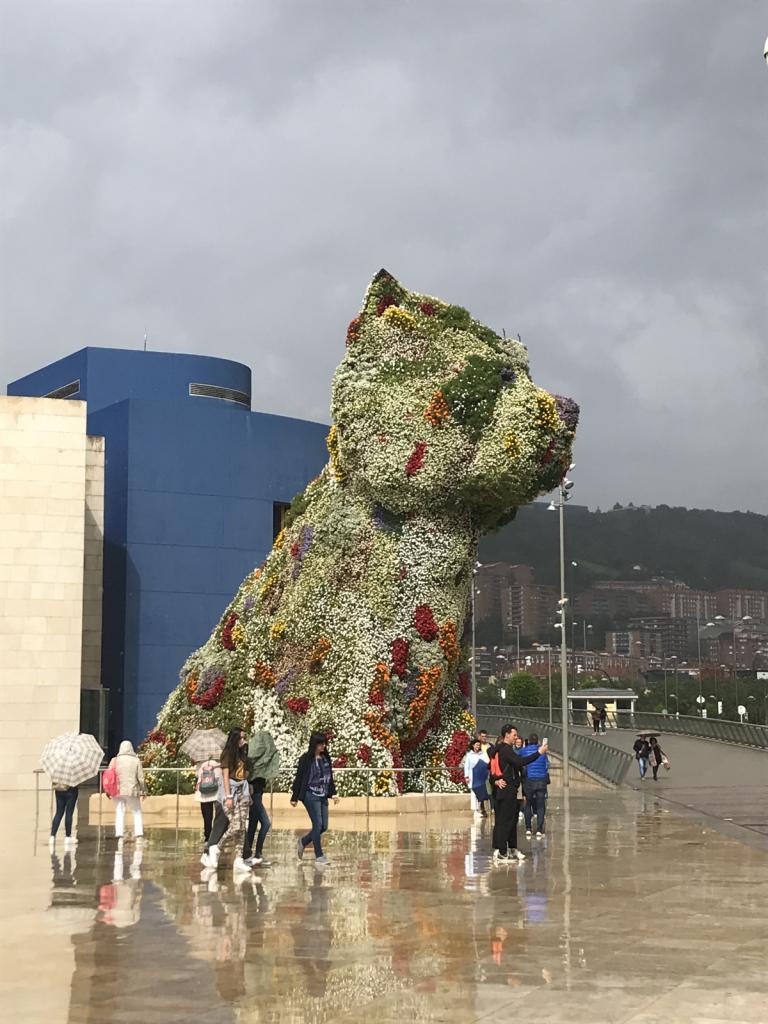 We sadly said farewell to Hel n Col, who, as always were great company. Also it meant leaving the Basque region, with Bilbao being on the eastern edge. (I didnt know it actually goes into France as well and there are 3million Basques). Basque or Euskera is wildly spoken and Jay got pretty good at saying 'thank you', impressing many waiters and shop keepers! 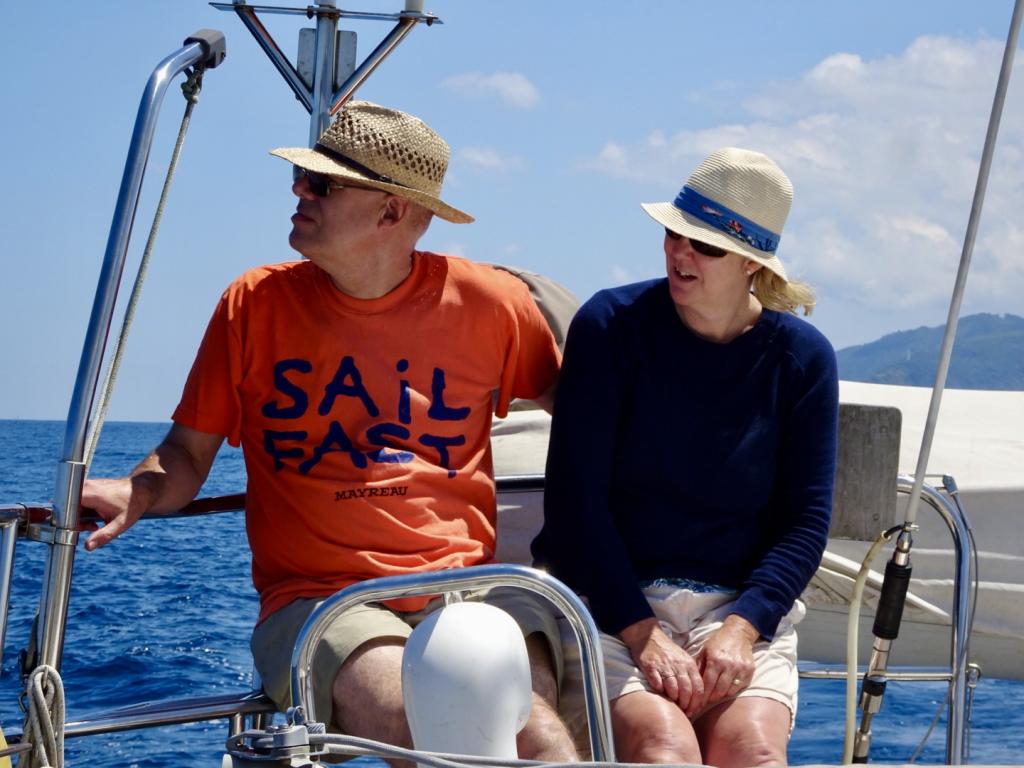