3-23 July
We had hoped Ben and Court would be able to join us on the north coast and sail with us to A Coruña but with the strong wind forecast they were only able to join is in A Coruña and so the only sail we managed was 2 hours around to Sada, the marina we had arranged to leave the boat in for a week. It was even too windy to go out for day sails but we did get to go out and do some sailing practice - man over board and Ben proved an excellent helm getting back to Court (not the real Court - a fender in the water) without problems. Whilst in harbour we saw the JS Elcano came into port. It's a Spanish Armanda's navy training ship, 4 masts, 113m long its the world 3largest tall ship and at over 2million miles has sailed the furthest. We got to go on the boat for a look around, the best bit being all the navy officers dressed in their white dress uniform.

Our trip back to the UK went smoothly and we managed to get through airports at either end without holdups. Kay and Andy's wedding was on a glorious day in Appleby; highlights included the bride donning a climbing harness post ceremony to climb a rock for a spectacular wedding photo, the bride and groom leaving the reception on the back of a tractor and the reception (with curry!) in a brilliantly decorated barn.
We also made a quick trip back home for Billy's 70s theme 70th birthday party - great to catchup with so many people.

Getting back to the boat, we were relieved to see it still floating and that Ben and Court had sailed off into the sunset. They were made very welcome in the marina and invited to the club's celebration of 'Santa Carmen' - the patron saint of boats and sailors. The Madonna was taken from the local church and put on a fishing boat for a tour of the bay with 100s of local boats following and then food and drink was served in the clubhouse. The invite was also extended to our next guests - Astrid, Malcolm, Per and Carmen. So Real Club Sada proved to be the most welcoming place we have been....and we weren't there! Thanks to B & C for looking after the boat and just a shame we didnt get to sail further. 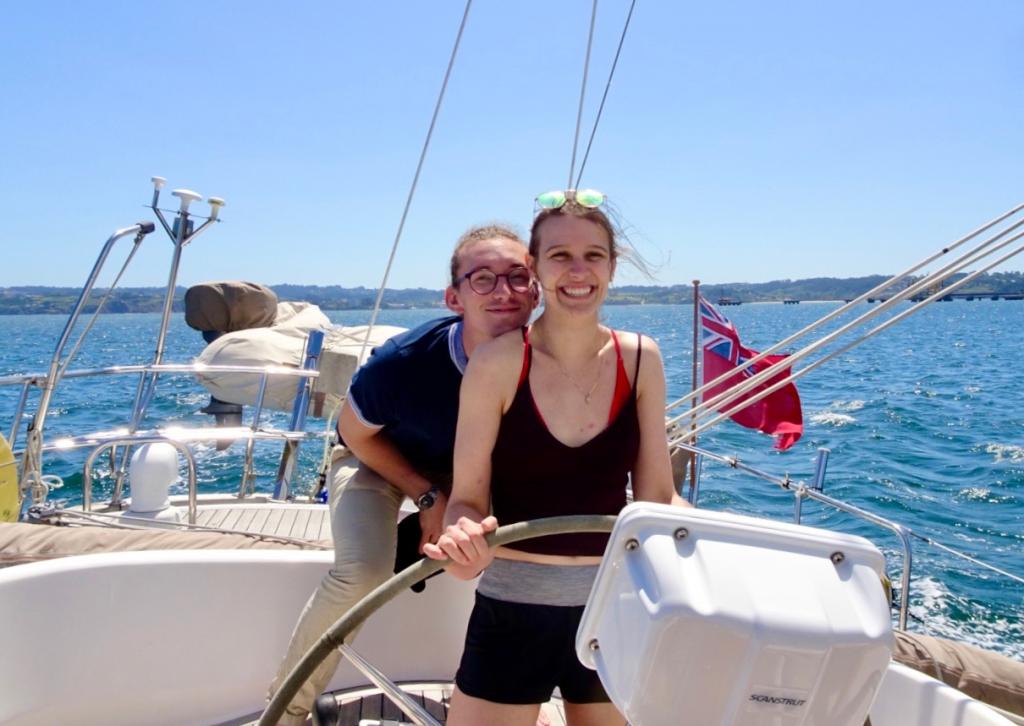 With more strong winds forecast we headed back round to the more sheltered marina of La Coruña for a couple of days and to give A,M,P&C the chance to see La Coruña.
We visited the worlds oldest lighthouse - 'The Tower of Hercules' built by the Romans in the 1st century and renovated in 1788. The original tower included a ramp going around the tower all the way to the top so it was easier to take firewood to the top to light a fire every night. There are various sculptures along the coast, we liked these granite monoliths.

In Galicia many towns have medieval festivals over the summer and La Coruña has one of the biggest. Lots of people dressed up, streets were lined with stalls selling food, drinks, candles etc, wandering musicians, street theatre and activities for children. It all created a very jovial atmosphere.
The cultural capital of Galicia is Santiago de Compostela (a 20minute train ride from La Coruña). In the year 820 the remains of St James the Apostle were found here and a splendid Catherdral built on the site. It has been the focus for pilgrims ever since and over 500,000 walk to Santiago de Compostela, each year, along one of 281 Camino De Santiago ways, starting all over Europe - Id previously thought there was only one! All are waymarked with yellow arrows, and you need to walk 60m to qualify as a pilgrim and then you can attend a special service (held everyday) for pilgrims. (We did attend the service, but didnt tell anyone we had only walked 100yds from the taxi).

We used our longer than expected stopover to put the guests to work on some boat jobs. Malcolm proved an able assistant, helping to fit a new piece of fuel pipe to stop air getting into the fuel supply, reconnecting our lightening conductor which had not been re-connected when the mast was last taken out (Worrying since we have been close to two thunderstorms!), getting the speedo to work - the long stopover in Sada had allowed the barnacles to grow and fixing a leak a leak in the supply to one of the toilets. (The speed is measured by a small wheel the goes through a hole in the bottom of the boat - so if barnacles attach to it the wheel will not turn).

The wind abated on the 23 so we set sail for Múxia, 50 miles south, we were very pleased to be able to sail all the way, especially as it was Per and Carmen's last day, before heading home to Norway. This area is the pleasantly named - Costa de Morte. In 2002 a damaged oil tanker - The Prestige, was in difficulty, no port in Spain, France or Portugal would allow it to enter, so after 6 days at sea it broke in half, covering the coastline in heavy duty oil and killing many seabirds and affecting the fishing industry for several years. No one has been found accountable for the disaster. This might explain the absence of seabirds? It was an early start to the day...so the skipper needed a little siesta!