Emerald in the anchorage with the ria behind

We are anchored in Ensenada de Muros in the Ria de Muros on the opposite shore to the village of Muros, meaning a dinghy trip is needed to get ashore. Sunday we managed a quick run ashore before the wind picked up, it died to nothing later and a pod of dolphins came in. The wind dies back to nothing for a few minutes before coming back with a vengeance blowing up to 37 knots (F8). There doesn't seem to be any daily temperature impact on the wind, with it blowing as hard overnight as during the day. Looking at the isobar chart there is kink over Finisterre between the Azores high and a heat low over Spain. On the positive side it's warm and the sun is shining and we're making lots of power.

There are a lot of fishing boats in Muros harbour in every size going as well as a tug like SAR vessel. The boats servicing the mussel farms seem busy. The mussels are grown hanging down from wooden rafts out in the ria. A glass bottomed tourist boat heads out of the harbour a couple of times a day to do a circuit of the ria.

There is a marina with finger pontoons; friends inquired about price and we reckon it would be around €40 a night for us. Not very tempting when there is a free anchorage outside and probably why its mostly empty. In terms of practicalities, there are big rubbish and recycling bins all around the harbour and town, we can tie dinghies on the ladders around the inner harbour but there is nowhere selling water. It is a shame more places aren't like Cedeira who have provided a free dinghy pontoon which encourages people to go ashore and spend money. You could also buy water at Cedeira.

A Gadis supermarket is right by the harbour; in terms of food shopping in this part of Spain, fresh milk is rare but with lots of brands of long life available instead. We haven't seen any cream products either. Fresh fruit and veg is plentiful as well as tinned veg including tined peppers which are useful for having on the boat. Wine is ridiculously cheap - under €1 for an easily drinkable bottle. The local beer - Estrella Galicia - is good, sort of halfway between a lager and an ale and not too fizzy.

One interesting find is seafood in tins for around €1 to €2 which I've been testing, today's tasting test tin was squid in tinto - lumps of squid in a black inky sauce. Not bad. There are all sorts of varieties - octopus, squid, sardines, mussels. There are also jars of tiny eels that I will be passing on; just looking at the contents of the jar made me start to gag. Ergh! 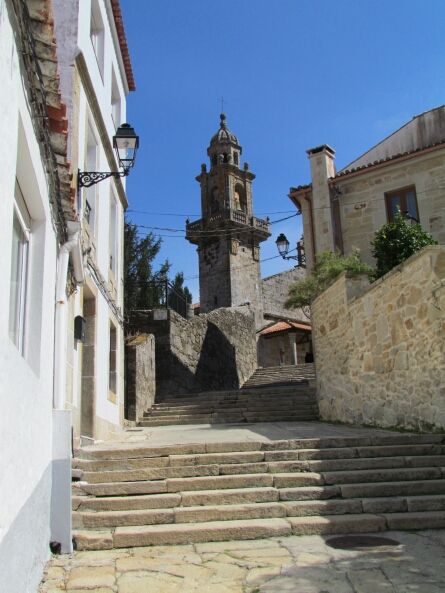 Muros steps heading up the hill

The town of Muros is attractive with tall terraces of stone buildings lining narrow, windy streets. Along the seafront are huge stone arches with cafes and shops underneath them. 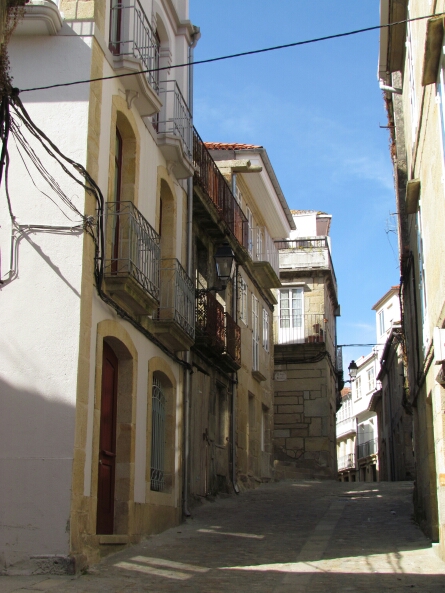 We had a walk out to a village opposite Muros yesterday, the roads little more than tracks. Here were more stone buildings built with granite - in places it looked like you could be in a little Yorkshire hamlet if it wasn't for the terracotta tiled roofs. White painted villas and biscuit coloured stone like that used in the Cotswolds completes the building style but all with their terracotta tiled roofs. Lots of grain stores are dotted around amidst small allotments and further into the hills there is a mix of pine and eucalyptus trees making a refreshing scent as you walk by. 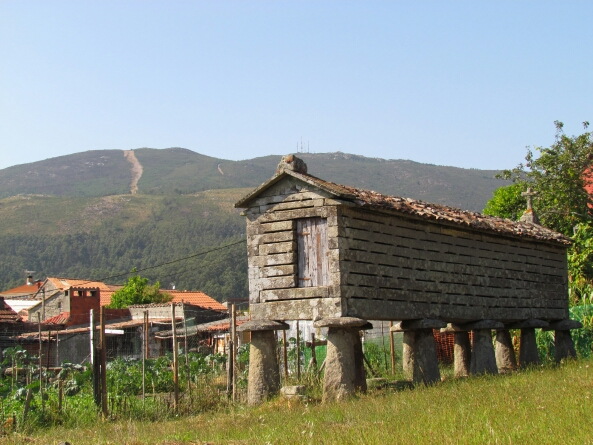 The socialising with other boats has been great, we've met some lovely people, but we are ready to move on now, tomorrow the forecast looks good with lighter winds so we hope to go to the next ria, Ria de Arosa.
More
Comments
Newer Older
Contents