A week in Culatra Emerald at sunset anchored off Culatra

It's been a good week here in Culatra getting back into the swing of life on the hook with mostly warm and sunny weather. Only one day were we kept aboard by strongish winds. It's been sociable too with friends from Lagos also anchored here

Tuesday we took the first ferry (7:45am so an early start but the next one wasn't until 13:00 which would be too late for the markets) to Olhao for some shopping, but not before we'd had a breakfast of huge buns. There are two market buildings side by side along the waterfront; one selling veggies, meat and cheese, the second for fish. We bought 2 decent sized mackerel (and the lady gutted them for me) along with some sardines for only €2.30. The streets of Olhao are good for a wander around; mazes of narrow alleyways and cobbled streets that wound off in different directions.

The ferry back was at 11:00am, it cost €1.85 each way, taking about 20 minutes. Both directions were busy - from Culatra there were children heading to the mainland for school and lots of ladies with their trolly bags off for their shopping. The return trip was equally busy but with tourists replacing school children and the ladies with bulging trolley bags which the ferrymen made them put on top of the ferry secured with a chain. Some of the ladies weren't very happy to be separated from their bags!

We managed to meet up with a friend of Colin's from his time with British Antarctic Survey who was in the area on holiday with his parents. Twice they came across on the ferry to Culatra and after lots of trips in our dinky dinghy we got them aboard. If you're reading this John it was lovely to meet you all and Colin asks if you've booked your flight back yet!

The ferry between Olhao, Culatra and Farol

We've had lots of walks along the beach on the south of the island. To the west is another little town which is called Farol (meaning lighthouse and guess what, there's a lighthouse there as this is the entrance way from the sea into the river). It has the single story little houses as in Culatra but most of them were empty. Unlike Culatra with it's year round residents Farol is seasonal with holiday makers making up most of it's population. It felt a bit like a ghost town until we came across a cafe that was open and preparing lots of tables for lunch - maybe a trip boat brings them all in. 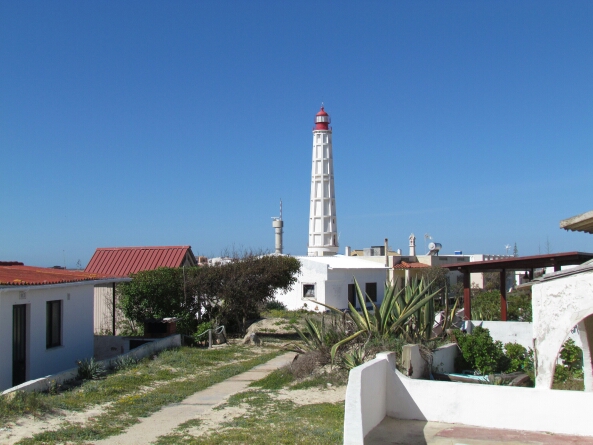 The farol at Farol

Walk east along the beach and its sand and more sand, we didn't get anywhere near the eastern end of the island even after 40 minutes of walking. The waves were breaking up on the shallows well offshore so we'll be keeping well out to sea when we pass by here.

There are lots of plants and flowers that manage to grow in this island made of sand. This one caught my eye - all around growing dead straight out of the sand are these single sturdy stalks with no leaves at all, just a mass of yellow bells growing around the top. They were only growing in the channels carved through the dunes where the sea finds it's way in on spring high tides. 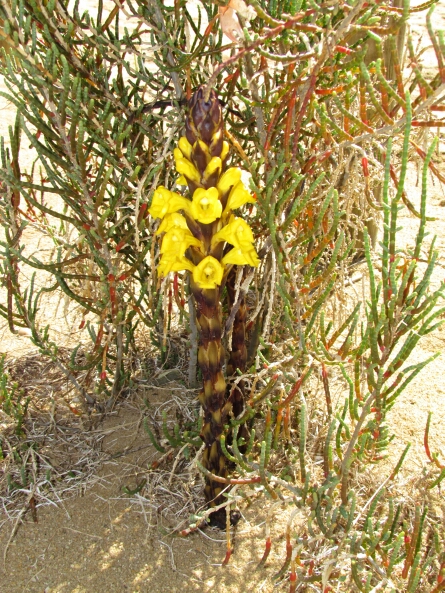 Walking along the boardwalk all you can hear in the gaps between the planes passing overhead is birdsong and the gentle swishing of the waves on the beach. There are the usual gulls but we also saw a hawk like bird hovering in search of prey and a small brown bird with a pointy top to it's head. I've looked in my British Birds book but can't find it there. Better get myself a European birds book! 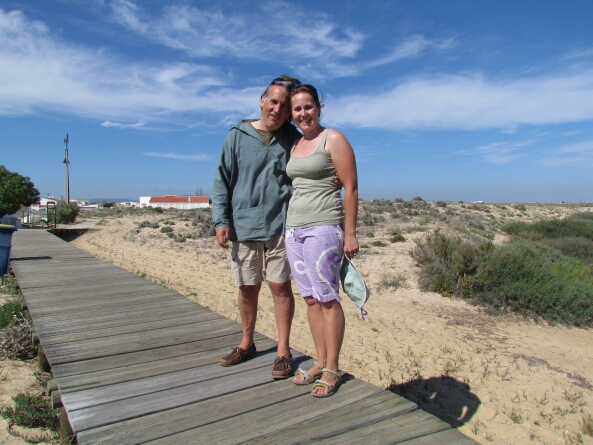 In the anchorage there have been around 10 boats anchored this week, plenty of room for everyone. We've had good holding in 5m of water in both west and easterly winds gusting up to 35 kts. It gets a bit lumpy in the stronger winds as a short chop builds up but it wasn't uncomfortable, just made the dinghy trip ashore a bit wet. We tied the dinghy up in the fishing harbour, pick anywhere that isn't in anyones way to leave it. It's a bit stinky in there with dead fish floating around and nets piled high on some of the pontoons but it's free and no one bothered us about leaving the dinghy there.

There is also a community of liveaboards in the drying lagoon next to Culatra with around 20 or so catermerans and bilge keelers sitting on the sand. Some have been here so long they've built gardens and enclosed sections of sand to make private areas for themselves.

In Culatra around 600 people live year round, many working as fishermen. There are bars and cafes and a couple of grocery shops with fresh fruit, bread and packaged goods. We failed to find any wifi that we could get connected to so relied on our Portuguese Vodafone data SIM for internet. 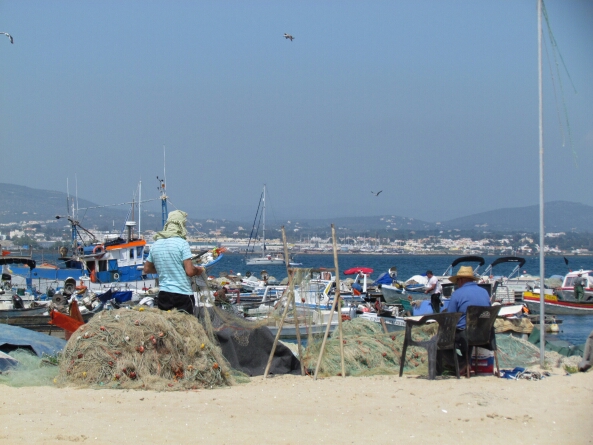