18 May 2014 | River Guadiana, border between Spain and Portugal
Nichola / still warm and sunny On Friday it was my birthday and as we were still up the river with friends it seemed like a good idea to have (another) night of partying!

Everyone made a dish so that it was a sort of picnic/tapas (being close to Spain it seemed like a good theme). A box of minging red wine was successfully turned into a sangria with the addition of peach schnapps, lemonade, orange juice plus chopped up oranges to keep with the theme. 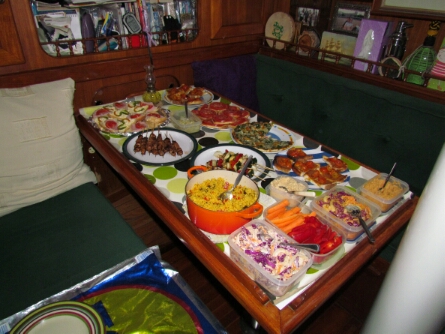 The weather forecast had threatened rain and there were some suspect clouds lurking to the west but it stayed dry and a great evening was had. Later on Colin played guitar whilst we all sang along and 'entertained' the other river dwellers into the early hours. Thanks for a great party Pat & Duncan, Vic & Marge and John & Gilly.

A friend, Gilly (her blog of their travels on Riverdancer is here) wrote me a poem as a present. I thought it was so good I had to share. Thank you Gilly!

"Nichola & Colin Wright,
Toiled hard day and night.
Their three years work was almost done,
They were ready now to find the sun.
The boat's a beauty, an Emerald queen,
The hull is white the rest is green.
When the tide was high in Brandy Hole,
And Emerald could start to roll,
They escaped the Crouch and muddy creek,
And the winters there that had been bleak.
We met them both in Lagos,
The marina that cost lots of dosh.
They are with us now quite close to Spain
Where we run and walk and sing and play.
Nichola's birthday is once a year,
But every day she's full of cheer
(not to mention wine and beer).
She dances with a one legged hop,
And head-bangs like she just can't stop.
Every day she writes her blog,
With a recent picture of a frog.
Just like the frog her clothes are green,
She's also often diving been,
Where the pollen dust can't make her sneeze,
Or give her a rash from toes to knees.
Happy birthday Nichola Wright
I'm sure you'll have a lovely night."