Beautiful golden light as we set sail from the River Guadiana

Monday 19th May
We set off down the river Guadiana Monday morning with the turn of the tide. It was cloudy for the first time in ages but stayed dry and we had an easy trip until we arrived at the last bend before the bridge. From no wind to gusting F6 and kicking up a little chop, we had a mad dash around the boat to close all the hatches and ports in case the chop got stronger and we took on spray. The wind was from the south west, so a little against us and the tide, which was causing the chop. The noise under the bridge was even worse than on our passage up and we could see some of the wire supports wobbling in the wind.

Once under we could see that anchoring off Ayamonte would be very uncomfortable with small waves building across the river so looked for somewhere on the Vila Real side. We couldn't get into the Ayamonte marina due to lack of enough depth and didn't fancy going into the crowded Vila Real marina in the wind. Just north of the ferry terminal we found a likely spot off of an empty commercial quay with two yachts tied up; didn't want to tie up and mess around with fender boards. The anchor dug in first go and after an hour of spinning around as wind and tide fought it out for who was strongest, he tide turned and we sat more comfortably. The ferry passed either side of with lots of space and we are now the subject of the ferry passengers' photo albums!

The wind continued to howl; a boat came in that we knew from Lagos and said it was horrible out there and several other boats rolled like Weebils (they wobble but they don't fall down) on their way in the river entrance; overheard radio conversations confirmed it was grim out there. Through the binoculars we could see what looked like a wall of water beyond the river entrance and constant spumes of spray hitting the harbour wall.

The decision to stay was made.

Tuesday 20th May
A reasonable nights sleep and up at first light, pushing the last of the incoming tide as we headed out. Beyond the harbour wall the sea was glassy flat with a slight swell. On to pass through the two sets of buoys marking the sand bar, least depth was 4.5m. As we went through the second set the engine stalled. Argh! Our momentum kept us going as Colin changed fuel tanks and the engine coughed back into life. We tried not to think about the consequences of that having happened if we'd left last night in the big seas. The fuel gauge on the tank had got stuck leaving us thinking we had more diesel in there than we had.

The sun had just risen and there was a beautiful light making the sea look like molten gold. Fishing pots were everywhere with many little fishing boats wizzing around but at least the pot markers were well marked for once with not one, not two, not even three, but four flags! 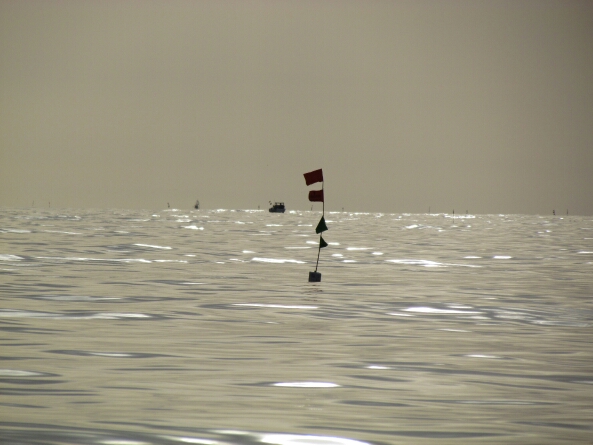 The rare sight of a well marked fishing pot

The wind gradually built during the morning and after a couple of hours we were able to sail. The bit of sun we'd had disappeared behind clouds and it got chilly enough for me to wear a woolly hat - not what we expected sailing here at this time of year! A few hours of easy sailing and then a line of squalls marched in from the south; it passed in front of us and we stayed dry. However, the wind increased as they passed and we were soon down to two reefs in the main and part furled genny and still doing over 6kts. The wind stayed over F5, the reefs stayed in the main but we let a bit of genny out to keep our speed up.

Another huge squall loomed up from the south, we got in front of this one but again strong gusts followed in its wake. When the F7 gusts kicked in we rolled the genny away and motor sailed in. As we turned around the corner into Rota, the swell moved behind and we rolled our way in. Into the marina and everything calmed down. Our friends came to take lines and it was such an easy berth to get into I decided to park Emerald. 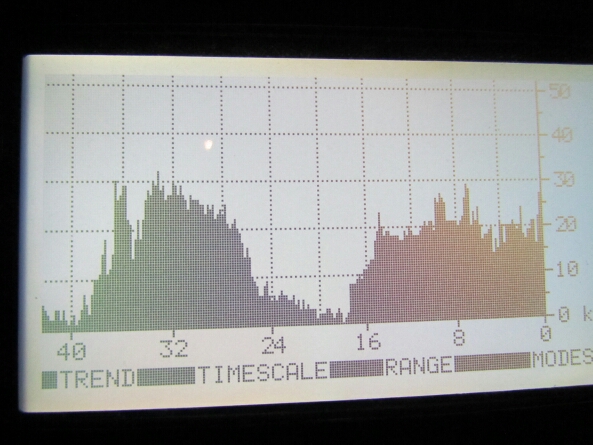 We discovered that our last carton of proper milk had decided to empty itself all over the fridge during the passage, spraying milk over pretty much everything. A double blow - a difficult clean up and the Spanish seem to prefer UHT milk to real milk so it would be nigh on impossible to find any real milk here. Ming milk it will be until hopefully we find some in Gibraltar. Too tired to face a clean up now, we abandoned ship to Red Snapper where they very kindly fed and watered us.