First off a Happy New Year to everyone and fair winds, calm seas and sunshine to you all.

We hope this year will be a goodd one for Emerald and crew as we plan to head off across Biscay later in the year, aiming for southern Spain or Portugal for next winter.

Before then we have a few jobs to do so we''ll be cracking on with them tomorrow. These include:
Hard dodger
Replace leaking water tanks under galley floor
Remove two seacocks (we've replaced the deck drains with scuppers so don't need the seacocks anymore and the less holes in the hull the better)
Anti-foul
Paint hull

In 2012 we got a lot done:
Replaced Genoa tracks
Removed and rebedded all deck fittings and stantions
Removed deck drains and made scuppers for water drainage instead
Installed new batteries and rebuilt the storage area in the tunnel so that the batteries are securely held but can be easily maintained (batteries are wet lead acid type)
Insulated under the aft bed and rebuilt the bed base
Ripped out aft head and installed a compact washing machine and built storage in the space instead
Repair starboard fuel tank
Build and install prop alternator
and many more little jobs!

No more Tracks of my Tears! Above - our shiny new track!

Its been a while so here is an update on the jobs we've been working on recently.

Our major success has been in replacing the genoa tracks. Our old tracks were so worn and bent that it was impossible to get the cars to move without the use of a large hammer - not so great to do on a rolling boat at sea. Plus, most of the fixing bolts were leaking and the water was beginning to damage our interior woodwork. 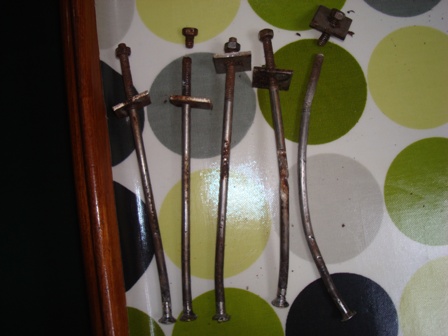 Pic: Some of the old bolts showing signs of rust damage

The old track had imperial 4" (102mm) spacings for the bolts but we were unable to get replacements in the UK for a reasonable price. We could have shipped from the US but the costs were astronomical. However, an offer came up from a fellow boater with some second hand tracks in pretty good condition that were thought to have the 4" spacing. Perhaps we should have triple checked the spacings but more on this later..... These tracks were 2 foot shorter than the old tracks but not really a problem if we lost the length off the front.

We then had to find M8 200mm A4 stainless steel bolts - not so easy! We could have had them custom made but this would have also another costly exercise. Instead we got the longest we could in A4 stainless and some threaded A4 bar. The bar was cut into lengths to make up the short fall in bolt length and welded onto the bolts. Colin has now added welding to his list of proficient skills!

The old tracks were removed, toe rail teak sanded and Coelan'ed. The existing bolt holes were redrilled to 8mm as we had increased the size of the bolts from M6 to M8. Then we put the new track on and started to drop the bolts in.... only to discover that our new tracks were in fact metric with 100mm spacing. So off with the track and we had to fill the old bolt holes with epoxy, sand down, re-Coelan and drill new holes.

All this was going on whilst the delightful British summer was throwing its worst at us.

With new bolt holes drilled we were ready again to put the new tracks in place. All the bolts slotted easily into place, the track bent to the curve of the hull without much effort and we were ready to add the nuts and washers on the end of the bolts and tighten it all down.

Colin contorted himself into various lockers and finally after a lot of work and time we finally had our two new tracks and can adjust the genoa sails to our delight! 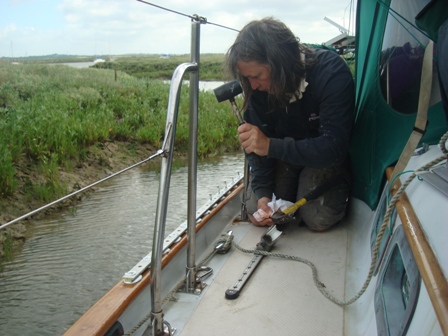 The Princess and the Pea bed so named because of its many layers! The refurb of the bed in the aft cabin is now finished, so here is the saga of what we’ve done.

Our aft bed sits above an empty space over the hull and it gets very cold in the winter, even with a 12cm piece of foam mattress. The old mattress was in two pieces and the ends of it touched against the bare hull where it curves up at the stern. Due to the very cold air underneath the bed base and our warm bodies, we used to get a lot of condensation, particularly down the end where there wasn’t so much air flow. This resulted in the evil mould taking hold in the hard to get to places. It was decided it was time for a new foam mattress and after much deliberation this is what we came up with:

LAYER 1: Bed base - 1 inch think underfloor insulation has been fastened under the plywood bed base, rotted panels replaced and the whole lot painted white. Where the bare hull is visible where it curves up at the stern we put insulation over the bare sections of hull, covered this with plywood and cut the bottoms of the cupboards around the bed to accommodate the insulation and ply. The picture here shows that job in progress. 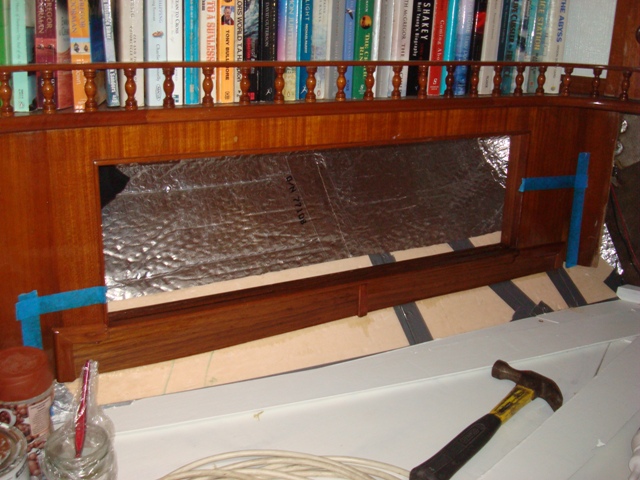 LAYER 2: wooden bed slats – these are curved wooden slats joined together with rubber strips available from IKEA. We already used these under the old mattress to create an air gap but they’d got a bit of mould from sitting in pools of condensation. We use 2 of the type for single beds so that we have one under each sleeping position and so we could cut the ends off the slats to follow the shape of the bed where it tapers towards the bottom. The slats have been cleaned and painted (they were varnished but not very thickly) to protect against the evil mould. The slats lift the mattress off the bed base to provide an air gap and prevent any condensation that gathers on the bed base from getting the mattress wet.

LAYER 3: This is a sandwich of wiry stuff between the IKEA slats and mattress and provides an additional air gap to aid ventilation.

LAYER 4: a new piece of 7cm thick, firm foam in two pieces to allow them to be easily moved and proped at the side of the bed if we want to ventilate underneath. I made new covers for the foam.

LAYER 5: a single piece of king size, 5cm thick memory foam sits on top. This is the first time we’ve had a single mattress piece across the whole bed and means we can finally sleep in the middle without falling down the gap between the foam pieces! We decided to have this memory foam layer separate from the other foam so that if the memory foam wears out we can just replace that piece without the cost of replacing the full 12cm thickness of foam. It also meant we could have a single piece rather than 2 pieces and so make it like a proper bed at last. The memory foam layer can be rolled up and put to the side when we want to ventilate underneath.

After a couple of weeks of use it is such an improvement over the previous bed. It’s no longer cold (we have had a couple of nights at nearly freezing outside – yes in May!!!) and is so comfy that it’s very hard to get out of it in the morning, especially with the rubbish weather we’re having.

Maybe useful for anyone planning a sail to Scotland?

We will post a proper blog soon but not much has been happening, plugging through the boat job list slowly.......... Working on replacing the genoa track at the moment.
Nichola
More
Comments

The forward cabin is all finished and Colin did a fantastic job with his usual great attention to detail. The new water tanks are in and held securely in place on the new shelving. Having lined the sides of the hull with insulation and tongue and groove last winter, we've added more insulation under the bed base and at the end of the bed to reduce the cold spots. A new storage cupboard has been made to make the most of the space between the tanks to replace the drawers we had to take out to put the tanks in.

We had a chance to see how well the insulation worked when we had snow a few weeks ago. It stayed cosy and warm in there so now it's time to do the same in the back cabin, where we sleep.

We moved to sleeping in the forepeak and began the job of taking apart the back bed. We were a little horrified by how bad things had got in there and cross with ourselves for not having done anything sooner (although we were doing lots of other jobs too!). Most of the bed base was rotten, so Colin has replaced the worst of it which will be painted to hopefully help protect it better. We'll need new foam and a cover for the mattress as what was there is mouldlyunderneath and the old cover has disintegrated.

Under the bed mattress we use a wirey fabric similar to this: HyperVent to create an air space between the mattress and the cold bed base. On top of this we have some wooden Ikea bed slats that are curved and lift the mattress off the HyperVent creating an additional space for air to circulate. Our old bed mattress does fit quite snugly into the surrounding woodwork so I'm thinking of getting the new foam cut slightly smaller to allow an air gap around the edges.

A design 'feature' of our boat is that at the narrow end of the bed, where the hull curves up at the stern, bare hull is actually touching onto the mattress. The hull is very cold (we live in the UK - perhaps the boat is telling us something - go somewhere warm) and our heat against the cold leads to rivers of condensation forming in that area. This has resulted in rotten wood along the sides of the bed which Colin is in the process of ripping out and replacing. We'll line the inside of the hull with underfloor insulation sheeting (this is what we've used elsewhere on the boat) and also the underside of the bed base.

The insulation we use is this and so far has worked well where we've used it to line the spaces between the hull and the back of cupboards and shelves in the saloon. Condensation will still form against the hull but it should now run straight down into the bilges rather than soaking into all the woodwork as it was before. The insulation is not affected by moisture so should last plenty of years and keep the boat cool once we get somewhere hot. 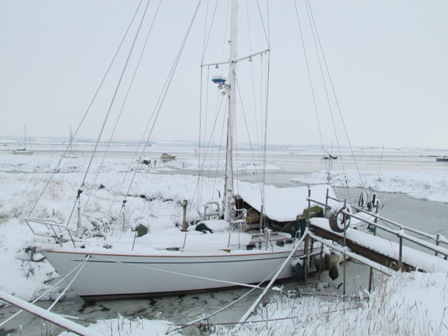 Pic: Emerald in the snow a couple of weeks ago
More
Comments
Newer Older
Contents